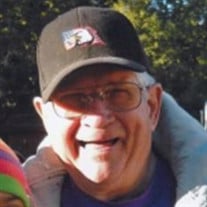 Kenneth Fredin, 92-year-old resident of Isle, MN passed away on Friday, December 18, 2020 at the Mille Lacs Health System in Onamia, MN. A private Funeral Service will be held at the Isle Evangelical Free Church in Isle, MN. Arrangements are with the Shelley Funeral Chapel of Onamia. Kenneth “Kenny” Mauritz Fredin was born on October 18, 1928 in Isle, Minnesota to Mauritz and Mable (Kilmer) Fredin. He attended Eastwood grade school and went on to graduate from Isle High school in 1946. In September of 1946, Kenny enlisted in the United States Marine Corp. until he was honorably discharged in August of 1948. Kenny was united in marriage to Lucille Fritz on June 12th, 1949 and they went on to have three beautiful children: Mark, Vickie, and Loy. He started working for Gopher Window Cleaning while also attending night school for refrigeration repair. In 1951, he started working for Sam O’Bannon as a Cement Mason #633 and spent the next 30 years in construction. He commuted to and from the cities for years and at one point, with the help of some friends, built a home for his family. He was a great craftsman. From 1961-1965, Kenny was also co-owner of the local Coast-to-Coast hardware store with Howard Paulson before selling his share of the business. In 1989, Kenny had a heart attack and had to retire from construction work. After the passing of his youngest son Loy in 1995, Kenny took pride in spending time as a father figure and role model to Loy’s four girls in addition to the rest of his grandchildren. Kenny liked to spend his time fishing, woodworking, watching sports, and spending time with family doing things like snowmobiling, horseback riding, and even making maple syrup directly from the tap. He also liked to hunt, Elk especially with his friends Clyde, Dennis, and others. Kenny was an active member of the American Legion in Onamia and was particularly fond of chicken dinner night! With his wife Lucille, they spent a great deal of time traveling the states in their motorhome, attending countless Coachman Rallies together. He was a volunteer firefighter for the City of Isle and took pride in volunteering as superintendent at church as well. In his later years, he enjoyed going for drives with his son Mark who spent a great deal of time with him, and talking on the phone with his daughter Vickie several times a day. Kenny is survived by his loving wife of 72 years, Lucille Fredin; son, Mark; daughter, Vickie; grandchildren, Nicole, Azure, Kelly (John), Jessica, Heather, Pennon (Monique), Philisha, and Timothy; great-grandchildren, Austin (Kiana), Tamera, Zachary, Brandon, Alexis, Adriona, River, Lucas, Breckin, Jade, Angel, Christian, Frederik, Nikko, and Nadra; great-great-grandchildren, Avery, and Abel. Kenny was preceded in death by his parents, Mauritz and Mable Fredin; son, Loy; brother, Stanley; sisters, Helen (Richard), Sandra (Leroy); and great-grandchild, Taylor. All that knew Kenny will remember his humor, infectious laugh, and wonderful personality…an irreplaceable Patriarch that will forever live on in our hearts. He will truly be missed.

Kenneth Fredin, 92-year-old resident of Isle, MN passed away on Friday, December 18, 2020 at the Mille Lacs Health System in Onamia, MN. A private Funeral Service will be held at the Isle Evangelical Free Church in Isle, MN. Arrangements are... View Obituary & Service Information

The family of Kenneth Mauritz Fredin created this Life Tributes page to make it easy to share your memories.