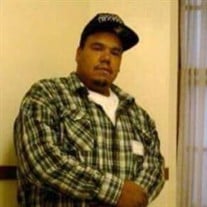 Miskwaanakwad, Kenneth Machen, Jr., 44-year-old resident of Minneapolis, MN passed away on Friday, October 23, 2020. Funeral Ceremony will be held at 10 AM on Wednesday, October 28, 2020 at the Mille Lacs Band of Ojibwe Community Center on the... View Obituary & Service Information

The family of Kenneth Machen Jr. created this Life Tributes page to make it easy to share your memories.