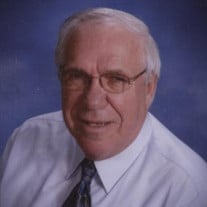 Lawrence "Larry" Britz, 81 year old resident of Little Falls, MN passed away Sunday, November 14, 2021 at the St. Cloud Hospital in St. Cloud, MN. A Mass of Christian Burial will take place at 10:30 A.M. on Friday, November 19, 2021 at St. Mary's Catholic Church in Little Falls, MN with Father Ben Kociemba officiating. Burial will take place in the Minnesota State Veterans Cemetery north of Little Falls, MN. A visitation will be held from 4-8 P.M. on Thursday and from 9-10 A.M. on Friday at the Shelley Funeral Chapel in Little Falls, MN. Parish prayers will be prayed at 5 P.M. with the Knights of Columbus Office of the Dead at 6 P.M. on Thursday evening. The family of Larry requests that all guests attending the visitation are kindly asked to wear a face covering. Caring for Larry and his family is the Shelley Funeral Chapel in Little Falls, MN. Larry was born on August 19, 1940 in Foley, MN to the late Peter and Mathilda (Popp) Britz. He grew up in the Morrill area where he attended elementary school, attended High School in Milaca and later graduated from Little Falls High School with the Class of 1957. Larry began working at National T Foods, prior to serving in the United States Marine Corps for 3 years with an honorable discharge in January of 1962. He again went to work for National T before being employed at 7up Bottling Company in Little Falls for 29 years. When the company closed, he worked briefly at the Little Falls Boat Works and later Granite City Jobbing in St. Cloud until retiring in 2002. Larry was united in marriage to Beatrice “Bea” Bloch on May 2, 1966 at Seven Dolors Catholic Church in Albany, MN. In his free time he enjoyed hunting, fishing and gardening. In retirement, he volunteered at the Morrison County Food Shelf and St. Gabriel’s Hospital. Larry loved people and he made visits and phone calls to family and friends on a regular basis. He was a member of the Knights of Columbus and St. Mary’s Catholic Church in Little Falls, MN for over 50 years. What Larry enjoyed most in life was being with his family and many countless friends…..old and new. Larry was dearly loved and will be greatly missed. Larry is survived by his wife of 55 years, Bea Britz of Little Falls, MN; daughter, Dana (David) Cook of Duluth, MN; son, Dan (Kelly) Britz of Westerville, OH; brother, Floyd Britz of Hillman, MN; grandchildren, Aaron Cook and Avery (Andrew) Tout, Charlotte Britz and Jackson Britz and great-granddaughter, Sophia Tout. Larry was preceded in death by his parents, Peter and Mathilda Britz; brothers, Ervin Britz, Wilfred Britz, Rev. Francis “Padre” Britz, and Willie Britz; sister, Evelyn Hortsch and infant son, Jason Britz.

The family of Lawrence "Larry" Britz created this Life Tributes page to make it easy to share your memories.

Send flowers to the Britz family.