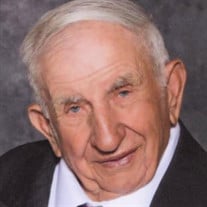 Lawrence A. Trettel, 90 year old resident of the Royalton/Bowlus area, passed away Saturday, April 3, 2021, at the St. Cloud Hospital in St. Cloud, MN. Mass of Christian Burial will be held at 11:00 A.M. on Saturday, April 17, 2021 at St. Stanislaus Kostka Church in Bowlus, MN with Father Joseph Herzing officiating. Burial will be in the parish cemetery. A visitation will be held from 3:00 - 7:00 P.M. on Friday at the church and from 9:30 A.M. until the hour of service on Saturday. A parish prayer service will be at 4:00 P.M. on Friday and the rosary will be led by the family at 5:00 P.M. To join in on Lawrence's Livestream, go to the Zoom website. Click join meeting, then the code for live streaming funeral Mass is 88422126207, then it will prompt you to put in a password, and that password is 999282. Lawrence was born on January 8, 1931 in Swan River Township to the late Peter and Julia (Krystosek) Trettel. He attended School District 8 through the eighth grade, a straight-A student who did not miss a day. He left school to help his father on the family farm and worked at the Swift & Company meat packing plant in South St. Paul during the winter months. In December 1956, he purchased the farm from his parents. Lawrence was united in marriage to his childhood sweetheart, Rita Zapzalka on June 3, 1957 at St. Stanislaus Kostka Church. He farmed full-time until his retirement in 1993 when he passed the farm down to his son, William and built a home on his son, Thomas’ land. He enjoyed helping Bill and Tom on their farms and giving them advice. He was “a jack of all trades.” He did electrician work as a side job, was a carpenter and handyman who could build and fix almost anything, made homemade sausage, and took charge in making the holiday turkey that was made to perfection. He also enjoyed hosting family and friends, telling funny stories, fishing, playing cards, listening to old-time music, and smoking fish and making pickled herring for family, friends, neighbors, and local priests. He had an excellent memory and excelled in math and spelling, even though he only had eight years of schooling. Lawrence was especially proud to be married to his “angel,” teaching his 13 children the “value of hard work,” and that the Trettel family farm was recognized as a Century Farm in 2019. Lawrence was a member of Holy Cross Church in North Prairie for 69 years and then joined St. Stanislaus Kostka Church in Bowlus. He also was a member of the Royalton Sportsman’s Club for many years and served on the District 1180 school board. He was devoted to saying the rosary daily and sharing his gifts and talents with others. His sense of humor will be missed. Left to cherish his memory are his sons, Kenneth of Little Falls, David (Janet) of Rice, Marvin (Rita) of Little Falls, John of Little Falls, Mark (Elizabeth Johnson) of Little Falls, William of Royalton, and Thomas of Royalton; daughters, Ann (Jerry) Kuklok of Rice, Susan (Steve) Sweeney of Sauk Rapids, Julie (Scott) Smith of Holdingford, Janet (Joe) Zachman of Holdingford, Marlys Trettel of Maple Grove, and Joyce (Rich) Zika of Sauk Rapids; 17 grandchildren, 12 great-grandchildren; sister-in-law, Evelyn Trettel of Little Falls. Lawrence was preceded in death by his wife of 62 years, Rita (Feb 2020); parents, Peter and Julia; brothers, Joseph and George; sister, Agnes Burton. A special thank you to Darlene Nix who provided compassionate care to Lawrence and also supported the family by doing household chores the past year so Lawrence could live comfortably in his home.

Lawrence A. Trettel, 90 year old resident of the Royalton/Bowlus area, passed away Saturday, April 3, 2021, at the St. Cloud Hospital in St. Cloud, MN. Mass of Christian Burial will be held at 11:00 A.M. on Saturday, April 17, 2021 at St. Stanislaus... View Obituary & Service Information

The family of Lawrence A. Trettel created this Life Tributes page to make it easy to share your memories.

Lawrence A. Trettel, 90 year old resident of the Royalton/Bowlus...

Send flowers to the Trettel family.