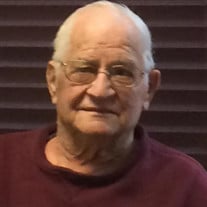 Lloyd E. Strassburg, 87 year old resident of Burtrum, MN, passed away Friday, September 18, 2020, at the St. Otto’s Care Center in Little Falls, MN. A Funeral Service will be held at 11 AM on Friday, September 25, 2020 at Faith Community Church in Burtrum, MN, with Pastor Terry Wardlaw officiating. Burial will be at Moses Dane Cemetery in Burtrum. Visitation will be from 4 to 7 PM on Thursday and from 10 to 11 AM on Friday at Faith Community Church in Burtrum, MN. Lloyd Strassburg was born March 4, 1933 in Round Prairie Township, Minnesota, to Emil and Ella (Poegel) Strassburg. He attended Oak Haven country school. He was united in marriage to Dorothy Wildman on December 29, 1952 in Todd county and raised their five children. Lloyd worked a variety of jobs, primarily as a Ford mechanic for many years. Along with his wife Dorothy, he helped with the Burtrum Bean Bake and with the Burtrum Boosters 4H Club. Lloyd and Dorothy received the Helen Keller Sight Award from the Grey Eagle/ Burtrum Lions Club. He enjoyed many activities including, hunting, fishing, camping, and playing cards with friends and family, as well spending time with family and grandkids. Lloyd is survived by his children, Raymond (Marge) Strassburg of Staples, MN, Deb (Barney) VanHavermaet of Burtrum, MN, Randy (Bonita) Strassburg of Bowlus, MN, Ron Strassburg of Burtrum, MN; daughter-in-law, Debbie Strassburg of Burtrum, MN; 14 grandchildren and 21 great-grandchildren. Lloyd was preceded in death by his wife of 67 years, Dorothy; son, Richard; two grandchildren, Kimberly and Alex; his parents, Emil and Ella; sister, Ione; brothers, Harold, Elmer, Elver, Glen and (infant) Norman. The family would like to thank the staff at St Otto’s in Little Falls for the wonderful care he received for the last 2½ years.

The family of Lloyd E. Strassburg created this Life Tributes page to make it easy to share your memories.

Send flowers to the Strassburg family.