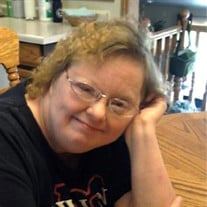 ** Floral Webstore Not Available Please Call (320) 532-4132 ** Loretta “Lori” Kent, age 58 of Milaca, MN passed away on January 7, 2022. A memorial service will be held from 1 PM – 4 PM on Saturday, January 15, 2022, at the Onamia Vets Club at the junction of US HWY 169 and HWY 27 N in Onamia, MN. Loretta "Lori" Kent went to heaven on January 7th, 2022. Lori was the seventh child of Roma and Bill Kent. born on April 6th,1963, in Onamia where she lived until moving to the resort on Mille Lacs with her family in 1969. While there she attended special education classes in Wahkon and Isle, graduating with the class of 1983. Lori and her dad moved just south of Onamia where she lived with him until moving to a VOA group home near Izaty's she later moved to Princeton and most recently Milaca. She attended the DAC both in Milaca and Princeton. Lori always had a smile for anyone that needed one, her go-to saying was "you're cute!". She could make any man turn red when she said that. Lori loved to do her latch hook projects giving them freely to everyone, coloring in her books, or doing word searches. She loved to go to her lake home on Lake Francis. She spent most weekends with Linda and Kallyn where she had her room filled with her special things. Cindy Larson was her caregiver for over 20 years, first meeting Lori at the white house by Izaty's, then caring for her at the N house in Princeton and transitioning with her to the N house in Milaca. Cindy was very much like a second mom to Lori. She loved her dearly including her in many family outings. They are together now. Cindy always said she could not retire from the VOA as long as Lori was still alive, sadly we lost Cindy to COVID in Sept, but feel that she stayed by Lori till the end. Lori is survived by her sister, Wanda Camarena, Linda (Kallyn); niece and guardian, Delaine Johnson all of Isanti; brothers, Bob (Marge), Fred (Carla); sister, Barb Mitchell (Robert0 all of Onamia; aunts, Pat Prudes, Jean Norton, Carole Kent, and Arlene Kent; and many nieces and nephews; her extended family at the VOA homes, her housemates and the many staff that cared for her over the years; and the DAC in Princeton. She was preceded in death by her parents, Bill and Roma; brothers, Tom and Bill; sister in law, Margaret; nieces, Melinda and Rozalia; great-nephew, Dylan; grandparents, John and Louise Kent and Wanda Trossauer; and her long time caregiver, Cindy Larson.