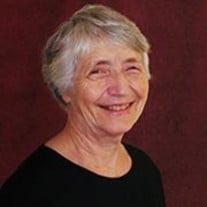 A celebration of life will be held Sunday, September 19, 2021, for Franciscan Sister Louise McKigney, 83, who passed away November 21, 2020. Mass will take place at St. Francis Convent, Little Falls, at 11 am with a visitation from 9-11 am. Masks are required. Mass will be livestreamed on YouTube: https://www.youtube.com/channel/UCiyFvZ53PAfd1apBC88kEuQ Donations to Franciscan Sisters Ministries preferred. Arrangements are with the Shelley Funeral Chapel in Little Falls, MN. Louise McKigney was born on December 19, 1936, in Tracy, Minn. Later the family moved to a farm near Sedan, Minn. Louise was the 14th of 15 children of the late Edward and Mary (Hauger) McKigney. She attended a country school for eight years, then attended St. Francis High School in Little Falls, graduating in 1955. She was accepted as a Franciscan Sister of Little Falls, Minnesota, on July 31, 1955, and given the name Sister Mary Zita. She returned to her baptismal name in 1967. She was a Franciscan Sister for 65 years. Sister Louise ministered in food service, serving at St. Gabriel’s Hospital, Little Falls; Community Mercy Hospital, Onamia; and Holy Spirit Convent, St. Cloud. In 1972 Sister Louise responded to the Franciscan call to step out of the “safe zone” and work among the poor in Holmes County, Miss., along with Sisters Beverly Weidner and Loretta Beyer. She spent 46 years living among the poor there, ministering as a social services advocate representing claimants for disabilities and other programs. Saint Francis’s intolerance of the status quo was an inspiration and guide as the sisters lived among the poor in Holmes County. They challenged the racism of the white elite in Holmes County. The sisters joined a black-led community organizing effort to protest discrimination in hiring and police brutality. They not only heard the words of Saint Francis, they lived them. In 1982 the sisters began to accept children whose parents were unable to care for them. Sister Louise played an integral role in providing a nurturing environment for these children. In 1989 Sisters Louise, Loretta and Beverly received the Rural Organizing and Cultural Center annual award for Outstanding Advocacy Work. In 2003 they received the Franciscan Federation Reconciler Award—a prestigious award given annually to a person or group that exemplifies the spirit of the Federation. Sister Louise was preceded in death by her parents and siblings: Vincent (Audrey), Mary (Bill) Baumgartner, Edward, Charles, Helen (Al) Grandy, Rita (Nicholas) Jansen, James, and Joan Peters; sisters-in-law Marci McKigney and Arlene McKigney; brothers-in-law Edward Helm and Lawrence Rasmusson. She is survived by siblings: Theresa Helm, Goodrich, Mich.; Geraldine Rasmusson, Glenwood; Alice (James) Kinney, Sauk Centre; Dorothy (Walbert) Peters, Springdale, Ark.; Robert, Osakis; and Leo, Villard; sister-in-law Barbara, Royal Oak, Mich.; brother-in-law Jerome Peters, Sauk Centre; as well as by many nieces and nephews and her Franciscan Community.

A celebration of life will be held Sunday, September 19, 2021, for Franciscan Sister Louise McKigney, 83, who passed away November 21, 2020. Mass will take place at St. Francis Convent, Little Falls, at 11 am with a visitation from 9-11 am.... View Obituary & Service Information

The family of Sr. Louise McKigney created this Life Tributes page to make it easy to share your memories.

Send flowers to the McKigney family.