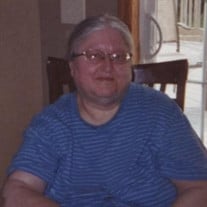 Louise H. Monnier, 71 year old resident of Little Falls, MN passed away Sunday, May 9, 2021 at St. Otto's Care Center in Little Falls, MN. A private family funeral will be held at the Shelley Funeral Chapel in Little Falls, MN followed by burial in Riverside Cemetery in Royalton, MN. Caring for Louise and her family is the Shelley Funeral Chapel in Little Falls, MN. Louise was born on June 24, 1949 in St. Cloud, MN to Helen (Winter) and the late Harry Monnier. She attended school in Sauk Rapids, MN where she graduated from Sauk Rapids High School with the Class of 1968. After graduation, Louise was employed at various jobs in the St. Cloud area where she resided for many years. She later moved into the Devine Home in Little Falls, MN where she was residing up until her passing. Louise enjoyed cooking, collecting numerous treasures and dearly loved her family. She was dearly loved and will be greatly missed. Louise is survived by her mother, Helen Monnier of Royalton, MN; brothers, John (Diane) Monnier of Breezy Point, MN, Michael (Ronda) Monnier of Royalton, MN and Patrick (Connie) Monnier of East Bethel, MN; sisters, Julie (Jerry) Goebel of Rice, MN and Suzanne (Gordon) Noggle of Rice, MN; sister-in-law, Sue Monnier of Rice, MN and several nieces, nephews, and friends. Louise was preceded in death by her father, Harry B. Monnier and brother, Harry M. "Butch" Monnier.

The family of Louise Helen Monnier created this Life Tributes page to make it easy to share your memories.

Send flowers to the Monnier family.