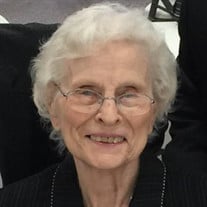 Lucille Athman Spahn, 94-year-old resident of Onamia, MN passed away peacefully on Thursday, November 4, 2021, at Gracewood Assisted Living in Lino Lakes, MN. A Funeral Mass will be held at 10:30 AM on Saturday, November 20, 2021, at Holy Cross Catholic Church in Onamia, MN. Visitation will be held 1 hour prior to Mass at Church. A private family interment will be in the Holy Cross Catholic Cemetery at a later date. Arrangements are with the Shelley Funeral Chapel of Onamia. Lucille was a long-term resident of Onamia. She is survived by her children, Rose Anne Meyer, Michael Spahn (Jannetta), Sharon Bjostad (Dean) Charles Spahn (Laurie); grandchildren, Sean Meyer (Celia), Crystal Spahn-Croft (Devin), Brianna Pucel (Kevin), Stacy Lopez, Sarah Williams (Phil), Christopher Spahn (Mia) and Nicholas Spahn (Kelsey). She was blessed with 13 great-grandchildren, including one expected in December and one named in honor of her. Grandma Lucille (Nana) was loved by all and especially adored by her grandchildren and great-grandchildren. She is also survived by her sister Annella, her brother Robert and many nieces and nephews. Lucille was preceded in death by her loving husband John, her son Randy, her parents, August and Olivia Athman; brothers, Clarence, Cyril, Jerome, Ronnie and John Thomas; sisters, Catherine, Jeannette, Sylvia and Mariella. Lucille was born in Lastrup but moved to Onamia when she was young. She spent her years in Onamia raising her family and working as the office manager and assistant in the Onamia and Isle Clinics. Lucille was a staple in the community and a friendly face for many, many years. She took great pride in her job and all the people she got to know over the years. She loved her church, singing, counted cross stitch, baking, reading, and trying new recipes. Most of all, she loved spending time with her children and grandchildren. Lucille was a patient, kind, wise and loving woman who will be remembered fondly by all those who have known her over the years.

Lucille Athman Spahn, 94-year-old resident of Onamia, MN passed away peacefully on Thursday, November 4, 2021, at Gracewood Assisted Living in Lino Lakes, MN. A Funeral Mass will be held at 10:30 AM on Saturday, November 20, 2021, at Holy Cross... View Obituary & Service Information