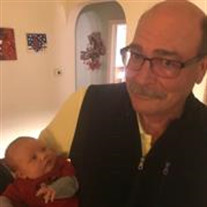 Mark Krinke, 65 year old resident of Little Falls, MN, passed away on Saturday, August 22, 2020 at his residence. A private family funeral will take place at the Shelley Funeral Chapel in Little Falls, MN. There will be a memorial gathering for friends on Wednesday, September 2, 2020 at the Little Falls VFW starting at 3:00 P.M. The family requests that guests attending the memorial gathering consider the safety of others be the top priority. Arrangements are with the Shelley Funeral Chapel in Little Falls, MN. Mark was born on August 15, 1955 in Minneapolis, MN to the late Alfred and Shirley (Trowbridge) Krinke. He grew up in Richfield, MN where he attended school. He graduated from the University of Minnesota with a Bachelors’ Degree in Agriculture. Mark started his career working for the United States Department of Agriculture in 1984, until his retirement in 2014, serving as a Farm Loan Manager. Mark was united in marriage to Vonnie Anderson and they raised 4 children in their Prior Lake house that Mark built with the help of his many friends and family. Mark loved going out two stepping with a beer and a bump on a Saturday night. He also enjoyed deer hunting, as well as fishing, grouse hunting, and spending time at the cabin in Orr, MN. He will always be remembered for his elaborate fireworks displays. Mark loved building things, whether it was a deck or a relationship. Mark was married to Deanna (Dee) in 2007 where they began their first of many adventures. He will be remembered for his kind and generous spirit. Mark was a loving father, grandfather and husband and was loved by all. Mark is survived by his wife, Deanna Krinke of Little Falls, MN; son, John (Ashley) Krinke of St. Paul, MN; daughters, Amanda (Jacob) Selseth of Long Lake, MN, and Jill Krinke of Savage, MN; grandchildren, Arthur Krinke, Axel, Leo & Vaughn Selseth; brother, Matthew Krinke of Glennallen, AK; and sister, Kim Krinke of Fairbanks, AK; Mark was preceded in death by his parents, Alfred and Shirley Krinke and son, Daniel Stewart.

Mark Krinke, 65 year old resident of Little Falls, MN, passed away on Saturday, August 22, 2020 at his residence. A private family funeral will take place at the Shelley Funeral Chapel in Little Falls, MN. There will be a memorial gathering... View Obituary & Service Information

The family of Mark Krinke created this Life Tributes page to make it easy to share your memories.

Send flowers to the Krinke family.