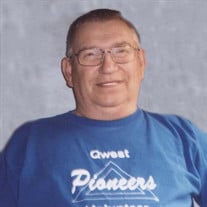 Marlin Parker,81 year old resident of Silver Bay, MN, formerly of Randall, MN, passed away on Thursday, November 12, 2020 at the Silver Bay Veterans Home. A Funeral Service will be held at 12 noon on Wednesday, November 18, 2020 at Zion Lutheran Church in Little Falls, MN, with Pastor Gary Hendrickson officiating. Burial will be at the Minnesota State Veterans Cemetery north of Little Falls. Visitation will be from 10 AM to 12 noon Wednesday at the church. Arrangements are with Shelley Funeral Chapel in Little Falls. Marlin John Parker was born on August 9, 1939 in Long Prairie, MN to the late Ruben and Anna (Schmidt) Parker. He grew up in the Long Prairie area. Marlin entered into the United States Air Force in 1957 and served overseas in Turkey and in Europe. He was honorably discharged in 1960. Marlin was united in marriage to Violet Kezar on November 23, 1962 in Long Prairie, MN and they built their home in the Randall area. In 1981 they moved to Oklahoma, where they also built a home. Marlin worked for Honeywell for a while and was a long time employee for the telephone companies, retiring in 1999. They moved back to Randall in 2000. In his spare time he loved to fish, and taking the family out on the pontoon, but he didn’t like being in the water. He loved to work out in his garage, doing all kinds of projects, especially working with wood. Marlin was a member of the Little Falls American Legion Post #46. Marlin is survived by his wife, Violet of Randall, MN; son, Marlin (Shannan) Parker of Little Falls, MN and their children, Joe (Andrea), Matt (Nicole), John and Jeff, and son, Anthony (Andrea) Parker of Suffolk, VA and their children Riley and Zach; daughter, Cheryl (David) Barnes of Little Falls and their children, Kevin (Kara), Corey, Cameron and Kaleb; brother, Hillmer (Andy) Parker of Brainerd, MN; sisters-in-law, Marion and Millie; brothers-in-law, Bob and Riley; 7 great-grandchildren; nieces and nephews. Marlin was preceded in death by his parents, Ruben and Anna Parker, in-laws, George and Alice Kezar and grandson, Samuel.

The family of Marlin Parker created this Life Tributes page to make it easy to share your memories.

Send flowers to the Parker family.