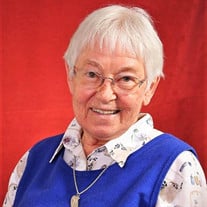 A Memorial Mass will be held Monday, November 29, 2021, for Franciscan Sister Mary Maureen Blenkush, 98, who passed away November 17, 2020. The Memorial Mass will take place at St. Francis Convent, Little Falls, at 11 am with a visitation from 9:30-11 am. Masks are required. Donations to Franciscan Sisters Ministries preferred. Mass will be live-streamed on YouTube: https://www.youtube.com/channel/UCiyFvZ53PAfd1apBC88kEuQ Ursula Rose (called Sally) was born on November 12, 1922, in St. Stephen, Minn. She was the eighth of 11 children born to the late Andrew and Rose (Oman) Blenkush. She was born and baptized on that November day. The Blenkush children played together and had fun together. Sally attended school in St. Stephen where all her classmates were relatives. There were two teachers, one for first through fourth grades, and one for fifth through eighth grades. Sally attended St. Francis High School. It was during her high school years that she felt a call to religious life and on January 5, 1940, she entered the postulancy. She was accepted as a Franciscan Sister of Little Falls, Minnesota, on August 12, 1940, and given the name Sister Mary Maureen. She was a Franciscan Sister for 80 years. Sister Maureen obtained her R.N. at St. Francis School of Nursing, Breckenridge, and a master’s in pharmacy from North Dakota State University, Fargo, N. Dak. Sister Maureen ministered as a staff nurse, nursing instructor and pharmacist at several Franciscan Sisters facilities in Minnesota, Wisconsin and Illinois. Later, she served as a parish minister in several parishes, as Motherhouse Administrator and as coordinator of the convent library. She served on governing boards of health care facilities for 25 years. In Little Falls, Sister Maureen was very active in promoting and implementing the annual “Relay for Life” program for many years. It is not surprising that, in 2000, the Little Falls Exchange Club awarded Sister Maureen its highest honor, the Golden Deeds Award. While living at Our Lady of Lourdes Convent in Little Falls, she was very active in a prayer group that met on a regular basis. Sister Maureen treasured the gift of life and believed the appropriate response to this gift was to live it as fully as possible. She was a fun-loving, creative and enthusiastic person, and always had a witty comeback. Sister Maureen was preceded in death by siblings, Florence, August, Mary Alice Sowada, Dorothy Henz, Laurence, Leon, Claude, Josephine Sowada, Theresa Gregory and Philip. Survivors include nieces, nephews and her Franciscan Community.

A Memorial Mass will be held Monday, November 29, 2021, for Franciscan Sister Mary Maureen Blenkush, 98, who passed away November 17, 2020. The Memorial Mass will take place at St. Francis Convent, Little Falls, at 11 am with a visitation from... View Obituary & Service Information

The family of Sr. Mary Maureen Blenkush created this Life Tributes page to make it easy to share your memories.

Send flowers to the Blenkush family.