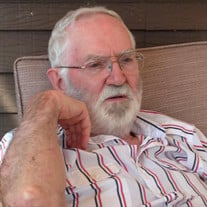 Melvin "Mel" R. Larson, 87 year old resident of Upsala, MN, passed away on Tuesday, August 24, 2021, surrounded by family. A Funeral Service will be held at 11:00 A.M. on Monday, August 30, 2021 at Community Covenant Church in Upsala, MN with Rev. Steve Weihsmann officiating. Burial will take place at a later date. Visitation will be one hour prior to the service on Monday at the church. Caring for Melvin and his family is the Shelley Funeral Chapel of Little Falls, MN. Mel was born in Ticonic, Iowa, on April 2, 1934 to the late Charlie and Floy Lella (York) Larson, along with his twin sister, Melva Ann. He was in the Army from 1954-1956, came home and married Joyce Nelson on October 27, 1956, his Prom date from 4 years earlier, entered college at Iowa State where he graduated with a BS in Civil Engineering. Mel then decided to take his talents to a little-known startup company called Wells Concrete Products, had two sons, Scott and Ross, and retired 38 years later, which is when he and Joyce moved to Upsala, MN. Mel was interested in various hobbies and organizations. Scouting, horseshoes, golfing, pheasant hunting, fishing, reading, crossword puzzles and woodworking, which he especially enjoyed teaching to his grandkids and anyone else who would listen. Mel was very active in the church and the men’s bible study. He never met an old movie (pre-1950) that he didn’t watch or didn’t like. Mel also lived vicariously through his sons by riding bicycles (which he crashed), 4 wheelers (which he crashed) and motorcycles (which he crashed). Mel is survived by his loving, devoted, long-suffering wife, Joyce of 64 years, who should be sainted; sons, Scott Larson and wife Joni, Ross Larson; grandchildren, Aaron, Cassandra, Kaitlyn; great-granddaughter, Eastyn; sisters, Melva Wannamaker and Evelyn St. Peter, and countless nieces and nephews. Mel was preceded in death by his parents, Charlie and Floy Lella Larson; sister, Eileen Henry; brother, Darrell and grandson, Bryan. PS. JOYCE WHERE’S MY (whatever he happens to be looking for, ie hammer, coffee mug, screwdriver, hearing aids, glasses, horseshoes, putter, shotgun shells, glue, pencil, paper, tape measure, water glass, crossword…..to be continued)???

The family of Melvin "Mel" R. Larson created this Life Tributes page to make it easy to share your memories.

Send flowers to the Larson family.