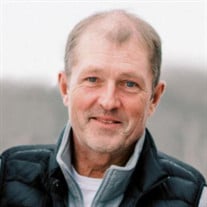 Michael “Mike” Joseph Bursch, 54 year old resident of Brainerd, MN, formerly of Royalton, MN, passed away Wednesday, November 17, 2021, at the St. Cloud Hospital. A Memorial Service will be held on Tuesday, November 23, 2021, at the Shelley Funeral Chapel in Little Falls, at 11:00 A.M., with Pastor Eric Holst officiating. A visitation will be on Monday, November 22, 2021, at the Shelley Funeral Chapel in Little Falls from 4:00 - 8:00 P.M., and on Tuesday from 10:00 - 11:00 A.M. Caring for Mike and his family is the Shelley Funeral Chapel of Little Falls. Michael Joseph Bursch was born on June 8, 1967, to the late Richard and Loretta Bursch in St. Cloud, MN. He grew up on the outskirts of Gilman, MN, and graduated from Foley High School in 1985. On June 22, 1991, Mike was united in marriage to Rhonda Prokott at Saints Peter and Paul Church in Gilman, MN. He worked various jobs, but had spent most of his career in the concrete field. Mike had finished his working career as a carpenter for Cragun’s Resort on Gull Lake. In his free time, Mike could be found building incredible garages to hang out in, camping, spending time in Two Harbors and Duluth, antiquing, cutting down trees, splitting wood, ice fishing, sports, pranking his co-workers and friends, and simply listening to classic rock. He had a radio playing at all times! Mike’s pride and joy in life was being an incredible husband, dad, papa, son, and brother. He will be deeply missed by all who knew him. Mike is sadly loved, missed, and survived by his wife of 30 years, Rhonda; sons, Brett Bursch (Haley), and Blake “Little Bursch” Bursch; daughters, Brooke Falk (Matthew), and Paige Schyma (Cody); sister, Kim Bursch of Sauk Rapids; mother-in-law, Pieta Prokott of Brainerd; brother-in-law, Dan Prokott (Judy) of Sobieski; sisters-in-law, Sharon Waytashek of Royalton, and Julie Popp (Terry) of Rice; 3 grandchildren, with another on the way, Charlie Bursch (6yrs), Hendrix Falk (2yrs), Theodore Schyma (2mos), and Baby Falk due 5/2022; and many nieces and nephews. He was preceded in death by his parents, Richard and Loretta Bursch; father-in-law, Michael Prokott; and nephew, Cody Waytashek.

The family of Michael "Mike" J. Bursch created this Life Tributes page to make it easy to share your memories.

Send flowers to the Bursch family.