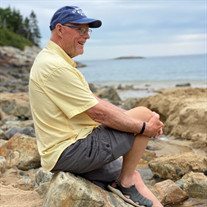 Paul Edward Lundgren, 69, of Albany, MN went to be with his Savior on October 23, 2021, at the St. Cloud Hospital. A Memorial Service will be held at 3:00 PM on Wednesday, October 27, 2021, at the Community Country Church in Holdingford with Rev. Bill Abeler officiating. Burial will be at a later date. Visitation will be from 4 to 8 PM on Tuesday at the Community Country Church in Holdingford, MN. Caring for Paul and his family is the Shelley Funeral Chapel of Little Falls, MN. In lieu of flowers, the family requests that memorials be sent in Paul’s name to Camp Lebanon by mail at 1205 Acorn Road, Burtrum MN 56318 or online at www.camplebanon.org/donate. To join in on Paul's funeral via livestream, please click the following link: https://my.gather.app/remember/paul-lundgren Paul was born February 26, 1952, to Kenneth and Marilyn (Fillmore) Lundgren. He grew up in Robbinsdale, MN as the second of four siblings. After he finished high school, his family purchased and operated Lundgren’s Upper Cullen Resort near Nisswa, MN. One summer while living at the resort, Paul asked out a beautiful car hop whom he had previously met at church. He married Donna Schack on August 23, 1975. They made their home in Brooklyn Park after Paul completed his bachelor's degree at Northwestern College in St. Paul, and a Masters of Divinity at Bethel Theological Seminary in Arden Hills. During seminary, Paul started delivering packages for UPS. Paul continued to provide for his family for 37 years as a UPS driver who cared more about the people he was delivering to than he did the packages which he carried. He and Donna added Nathan, Naomi, and Bethany to their family before building their new home in Maple Grove, MN and moving there in 1991. He retired from UPS in 2014, and began his new “career” as a volunteer for several ministries. Paul and Donna moved to Albany, MN in 2016 to be closer to Camp Lebanon, where they volunteered regularly. Paul’s life was marked by dedication and loyalty to whatever he did. He loved baseball, played on numerous softball leagues each summer, and often took his kids to Twins games at the Metrodome. He was an avid fisherman and would never be caught without enough tackle. He ran with a passion, completing 16 marathons and countless 5k races. Most importantly, his love for the Lord and his Word was evident by the many Bibles, commentaries, and Christian books he enjoyed. His trips to visit the kids and grandkids always included a bag of books to consume between card games of golf and taking his dog Eddy for a walk. He taught Sunday School for many years, and leaves a legacy of marked-up Bibles and time devoted to studying and understanding God’s Word. Paul will be remembered and dearly missed by his wife Donna; son, Nathan (Brittany) Lundgren of Kooskia, ID; daughters, Naomi (Luke) Perman of Lowry, SD and Bethany (Joseph) Yard of Lindale, TX; 14 grandchildren; siblings, Dave (Kathy) Lundgren of Nisswa, MN, John (Jill) Lundgren of New River, AZ, and Mary (John) Bergquist of Nisswa, MN; and numerous nieces and nephews. Paul has joined his parents Ken and Marilyn in heaven.

Paul Edward Lundgren, 69, of Albany, MN went to be with his Savior on October 23, 2021, at the St. Cloud Hospital. A Memorial Service will be held at 3:00 PM on Wednesday, October 27, 2021, at the Community Country Church in Holdingford with... View Obituary & Service Information

The family of Paul E. Lundgren created this Life Tributes page to make it easy to share your memories.

Paul Edward Lundgren, 69, of Albany, MN went to be with his Savior...

Send flowers to the Lundgren family.