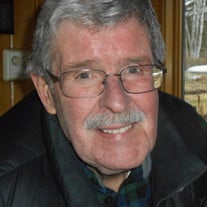 Peter W. Hemp, 68 year old resident of Tofte, MN, formerly of Edina, MN, passed away, Saturday, January 23, 2021 at St. Luke’s Hospital in Duluth. A Mass of Christian Burial will be held at 11 AM on Saturday, October 2, 2021 at St. Peter's Catholic Church in St. Peter, MN with Father Craig Timmerman officiating. A Gathering of Family and Friends will be held from 10 to 11 AM Saturday at the church. Peter William Hemp was born on March 15, 1952 in Minneapolis MN, to the late William and Elizabeth (Long) Hemp. When he was five years old he moved to Germany with his Mother, Father and two siblings, where his Father opened 3M in Germany and later in Sweden. Five more siblings were born in Germany and Sweden. He was fluent in the German and Swedish languages. They returned to the United States in 1967. Pete worked at ADC Telecommunications for many years. He became Vice President of World Wide Manufacturing in 1989. He opened the ADC Telecommunications facility in Shakopee, Mn in 1998 and many more telecommunication plants around the world. Pete has touched many lives. He mentored people for work and their personal lives.  Pete loved music, books, conversing with people, and enjoyed his cocktails. Pete graduated from Edina High school in 1971. He also graduated from Harvard Advanced Management Program in 1995. He adopted his son Jason in 1976. He met his wife Lisa in 1982. They married on the shore of Lake Superior in Tofte MN in 1989. He retired in 2000 and moved to Tofte MN, where they have resided for 20 years. He is survived by his wife Lisa; son Jason (Jenny) Hemp; sisters, Mary (Gary) McCracken, Jeannie Pearson, and Angie Hemp; brothers, Tom (Linda) Hemp and Joe Hemp; grandchildren, Catalina, Morrison, Dalton, Peyton, Josie and Layla Hemp; many nieces, nephews, other family and many good friends. Pete was preceded in death by his parents, William and Elizabeth Hemp; and two brothers, Jimmy and John Hemp. He will be truly missed.

The family of Peter W. Hemp created this Life Tributes page to make it easy to share your memories.

Send flowers to the Hemp family.