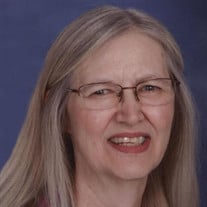 Rachel Flogstad-Heise, 69 year old resident of Little Falls, MN, passed away Wednesday, May 19, 2021, at St. Otto’s Care Center in Little Falls. A memorial service will be held on Wednesday, June 2, 2021, at Bethel Lutheran Church in Little Falls, at 11:00 A.M., with Pastor Kari Pancoast officiating. A visitation will take place on Wednesday, June 2, 2021, from 10:00 A.M. - 11:00 A.M. at the church prior to the service. Caring for Rachel and her family is the Shelley Funeral Chapel in Little Falls. Rachel Ann Flogstad-Heise daughter of the late Paul and Inez (Miller) Flogstad was born on June 18, 1951, in St. James, MN. She was baptized and confirmed at Albion Lutheran Church in Godahl Township. She graduated from St. James Public High School in 1969, before attending college at Bemidji State University, where she received a Bachelors’ degree in Speech in 1973. After college, she moved to Minneapolis where she worked several jobs. She married her husband Dennis on January 27, 1978, and later moved to Dayton, MN to raise her family. In 1990 she moved with her family to Little Falls, MN to help run Fletcher Creek Campground, her husband’s dream. She realized her own dream when she received her Master of Arts degree with an emphasis in Rural Ministry from Luther Seminary in 2006. She served as an interim pastor at Bethel Lutheran Church in Little Falls, Church of the Cross in Nisswa, and Immanuel Lutheran Church in Hillman, and worked at First Lutheran Church in Little Falls until her retirement in 2018. Rachel loved board games, Minnesota sports teams (especially the Vikings and Twins), quilting, and was an avid reader throughout her life. Rachel is survived by her husband, Dennis; her two children, Steven (Elyse) Heise of Marlborough Massachusetts, and Lauren (Trevor) Brady of Little Falls; and three grandchildren; Carson and Libby Brady, and Maxwell Heise; as well as three siblings, Robert Flogstad, Jane (David) Oldenburg and Denise (Wynn) Hughes; as well as eleven nieces and nephews. Rachel was preceded in death by her parents, Paul and Inez Flogstad.

The family of Rachel A. Flogstad-Heise created this Life Tributes page to make it easy to share your memories.

Send flowers to the Flogstad-Heise family.