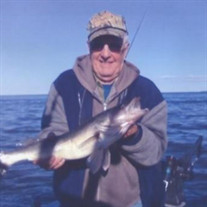 Ralph Hoheisel, 93 year old resident of Pierz, MN passed away Wednesday, September 30, 2020 at his home in Pierz, MN. A Mass of Christian Burial will take place at 10:30 A.M. on Saturday, October 3, 2020 at St. Joseph's Catholic Church in Pierz, MN with Father Kenneth Popp officiating. Burial will be in the St. Joseph's Parish Cemetery in Pierz, MN. A visitation will be from 9-10:30 A.M. on Saturday at St. Joseph's Catholic Church in Pierz, MN. Funeral arrangements are with the Shelley Funeral Chapel in Pierz, MN. Ralph was born on February 7, 1927 in Pierz, MN to the late Carl and Anna Hoheisel. He attended District #98 Country School until the 8th Grade. Ralph then went on to serve his country in the US Army during World War II. Upon his return, he was united in marriage to Loretta “Lolly” Boser on June 2, 1955. Ralph worked various jobs taking him as far as Montana and California. His main job was roofing and siding homes for Eagle Roofing and Siding in the Dakota’s. He loved his many fishing trips, especially his annual trip to Lake of the Woods. He passed his time by taking daily drives in the country. He also enjoyed shaking dice, playing cards, cutting hay, and taking an occasional trip to the Casino. Ralph looked forward to Monday mornings where he would have coffee at the Pierz Sales Barn with his little group of friends. He loved spending time with his children, grandchildren, and great-grandchildren. Ralph was a lifelong member of St. Joseph’s Catholic Church in Pierz, MN and a member of the Pierz American Legion. He was dearly loved and will be greatly missed. Ralph is survived by children, Bryan (Delly) Hoheisel of Willow Creek, MT, Lori (Steve) Kurtz of Cedar, MN, Randy (LuAnn) Hoheisel of Pierz, MN, Rick (Denise) Hoheisel of Pierz, MN and Russell (Julie Wilson) Hoheisel of Northfield, MN; sister, Muriel (Tom Vonderharr) Barclay and 11 grandchildren and 22 great-grandchildren. Ralph was preceded in death by wife, Loretta “Lolly” Hoheisel; parents, Carl and Anna Hoheisel; sister, LaVern Gunther; brothers, Elmer Hoheisel, Charlie Hoheisel, Cleo Hoheisel and infant brother, Herman Hoheisel.

The family of Ralph Hoheisel created this Life Tributes page to make it easy to share your memories.

Send flowers to the Hoheisel family.