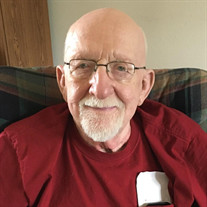 Raphael "Ray" Eckman, 93 year old resident of Little Falls, MN passed away Wednesday, March 31, 2021 at the Little Falls Care Center in Little Falls, MN. A memorial gathering will be held from 1:00 P.M. - 2:30 P.M. on August 19, 2021 at the Shelley Funeral Chapel in Little Falls, MN. Military honors will be held at 3:00 P.M. on August 19, 2021 at the Minnesota State Veterans Cemetery in Little Falls, MN. Caring for Ray and his family is the Shelley Funeral Chapel in Little Falls, MN. Raphael "Ray" Eckman was born on November 26, 1927 in Little Falls, MN to the late Vincent and Frances (Olek) Eckman. The youngest of eight children, Ray lived his entire life in Little Falls MN. He enlisted in the Army in 1946 and served as an amphibious boat mechanic before joining the MN Army National Guard in 1951. For 31 years, Ray worked at Camp Ripley, starting as a truck mechanic in the Combined Support Maintenance Shop and later becoming a commissioned officer in 1955. He ended his career as the Shop Superintendent at the rank of Colonel (06) in 1983. Ray also served as the Deputy Director for the State Area Command of the MNANG for several years. He was awarded the Legion of Merit for exceptionally meritorious conduct and outstanding leadership from 1973 to 1983. In 1951, while stationed at Camp Rucker, AL for training, Ray and Jeanette Zimmerman were married and they honeymooned in Key West, FL. They soon built a home for his growing family on Riverwood Drive, where he then resided for over 60 years. Ray enjoyed living on the river and owned many boats over the years and was particularly fond of pontoon boats. He enjoyed tinkering on anything that needed fixing; often he commented that he could “fix anything but broken hearts and bicycles”. Ray also enjoyed cutting his own firewood well into his 80’s. He loved to travel and drove through all of the lower 48 States and Alaska, often accompanied by his brother Walter. Ray also extensively toured Europe by either train or tour bus. His other interests included reading, watching WWII documentaries, and any and all activities associated with Post 46 of the American Legion, including serving as Post Commander. In retirement, Ray volunteered for the Food Shelf and drove patients to medical appointments. Ray was preceded in death by all of his birth family, his eldest son, Patrick (Renee Boicourt) in 2003, his wife of over 60 years, Jeanette in 2013, his step-grandson Jesse (Lisa) Rund in 2007 and his great-granddaughter Hailey Joe Albachten in 2016. Ray is survived by his children, daughter, Beverly (Stan) Rund of Elbow Lake, MN, son, James Eckman of St. Cloud, MN and daughter, Aimee Eckman (Joanna Stevens) of Eastham, MA; grandchildren, Lucas, Anna and Katrina Eckman, Johanna Vosen, Jordan (Ellie) Eckman, Alehna Albachten, Collin Eckman, Emma Eckman Stevens; step-granddaughter, Allison (Chad) Bagby; great-granddaughter, Avah Albachten; step-great-grandchildren, Alayna Rund, DJ Lenz, Nicole Bagby; and one step-great-great-grandchild, Asher Bagby.

The family of Raphael "Ray" George Eckman created this Life Tributes page to make it easy to share your memories.

Send flowers to the Eckman family.