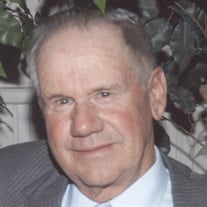 Raymond J. Dudycha, 88 year old resident of Cushing, MN, passed away on Thursday, March 18, 2021 at St. Gabriel’s Hospital in Little Falls, MN. A Memorial Service will be held at 11 AM on Saturday, March 27, 2021 at Randall Presbyterian Church in Randall, MN, with a visitation one hour prior to the service. Burial will take place at a later date in the Faith Presbyterian Cemetery in Minnetonka, MN. A Livestream link is available on Randall Presbyterian Church's website; www.randallpresby.org. Raymond J. Dudycha was born on July 17, 1932 in Minnetonka, MN to the late John and Lydia (Pashina) Dudycha. He attended Country School. Ray worked on the Chastek farm, and then at the National Tea Company for 7 years. He was united in marriage to Betty Horak on January 19, 1952. Ray then worked on the Horak family farm in Hopkins, MN, alongside his in-laws, until 1969. He then took a job with the City of St. Louis Park in their water department. Ray and Betty sold their house in Eden Prairie, MN, when he retired in December of 1993. They moved to a hobby farm in Cushing, MN, where they built greenhouses and planted a large garden. Ray sold the produce at various markets, and was known for his delicious tomatoes. He enjoyed driving his tractors as well as riding his snowmobile. Ray is survived by his sons, Gary (Winnie) Dudycha, Larry ( Carrie) Dudycha and Jerry (Steve Smith) Dudycha; sister, Carol Miller; 5 grandchildren and 9 great-grandchildren. He was preceded in death by his parents; wife, Betty; brother, Donald; sisters, Adeline, Jean, and Dorothy.

Raymond J. Dudycha, 88 year old resident of Cushing, MN, passed away on Thursday, March 18, 2021 at St. Gabriel&#8217;s Hospital in Little Falls, MN. A Memorial Service will be held at 11 AM on Saturday, March 27, 2021 at Randall Presbyterian... View Obituary & Service Information

The family of Ray J. Dudycha created this Life Tributes page to make it easy to share your memories.

Send flowers to the Dudycha family.