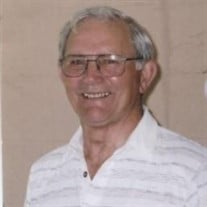 Richard A. Atkinson, 90 year old resident of Little Falls, MN, passed away Wednesday, July 8, 2020, at his residence. A Mass of Christian Burial will be Monday, July 13, 2020, at Our Lady of Lourdes Catholic Church at 10:30 A.M., with Father Ben Kociemba officiating. A visitation will be on Sunday, July 12, 2020, at the Shelley Funeral Chapel in Little Falls from 4:00-8:00 P.M., with Parish Prayers at 7:00 P.M., and from 8:30-10:00 A.M. on Monday at the Shelley Funeral Chapel. Burial will take place at Our Lady of Lourdes Catholic Cemetery immediately following the mass. Richard A. Atkinson Sr. was born on May 27, 1930, in Freeport, MN, to the late Fred and Elizabeth Atkinson. He graduated from Upsala High School. After graduation, Richard worked at Plastics Inc. and the Ford Plant in St. Paul, MN. Richard was united into marriage to Rita Schwientek on May 7, 1951, at Sacred Heart Catholic Church in Flensburg, MN. They moved back to Upsala, MN, where he then worked at Hagstrom Chevrolet in Upsala. He then purchased Hagstrom Chevrolet with his brother John and changed the name to Upsala Motors. Richard and Rita later moved to Little Falls and he worked at the Ford garage until retirement. Richard was an avid race fan. It did not matter if it was cars, snowmobiles, or motorcycles, he loved every minute of it. He was a self made engineer that could fix anything. If there was not a part, he manufactured one and made everything work. He was one of the best mechanics around the area. He was a faithful family man, and he will be dearly missed. Richard is survived by his loving wife of 69 years, Rita Atkinson of Little Falls, MN; sons, Greg (Sheri) of Little Falls, MN, Richard Jr. (Terry) of Little Falls, MN, Robert (Lidia) of Cushing, MN, and Scott Atkinson of Little Falls, MN; daughters, Sharon Ehnstrom of Texas, Debi (Duane) Bobick of Little Falls, MN, Diane (Wayne) Pruszinske of Remer, MN, Sandy (Rob) Wilczek of Little Falls, MN, Linda (Jim) Hilmerson of Little Falls, MN, and Pam (Karl) Gillingham of Fort Ripley, MN; brothers, Fred Atkinson of Litchfield, MN, John (Marlys) Atkinson of Upsala, MN, David (Gay) Atkinson of South Carolina; sisters, Helen Heisick of Upsala, MN and Irene (Gene) Lashinski of Bowlus, MN; and 31 grandchildren, 44 great-grandchildren, 4 great-great grandchildren, 3 step-grandchildren and 6 step-great grandchildren. Richard was preceded in death by his parents, Fred and Elizabeth; sister Alice Koshenina; brothers, Jerome, Jim, Ervin, and Donald; son-in-law Jim Ehnstrom; father and mother-in-law, Joe and Frances Schwientek; and one granddaughter and one grandson.

Richard A. Atkinson, 90 year old resident of Little Falls, MN, passed away Wednesday, July 8, 2020, at his residence. A Mass of Christian Burial will be Monday, July 13, 2020, at Our Lady of Lourdes Catholic Church at 10:30 A.M., with Father... View Obituary & Service Information

The family of Richard A. Atkinson created this Life Tributes page to make it easy to share your memories.

Send flowers to the Atkinson family.