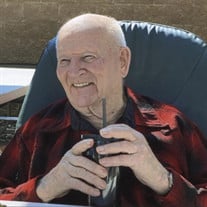 Richard R. Nelson, 95 year old resident of Sartell, MN, formerly of Little Falls, MN, passed away Wednesday, October 27, 2021, at the Country Manor in Sartell. Burial will take place at the Minnesota State Veterans Cemetery north of Little Falls, MN. Funeral arrangements are private with the Shelley Funeral Chapel in Little Falls, MN. Caring for Richard and his family is the Shelley Funeral Chapel of Little Falls. Richard Nelson was born on September 6, 1926, to the late Knute and Anna (Hahn) Nelson. Richard served in the US Army during World War II from February 26, 1945, to December 4, 1946. He was united in marriage to Leona Bloom on February 7, 1953. The couple had three daughters and one son. Richard is survived by his children, Kathy Christenson, Debbie Stumpf, Cindy (Gary) Kampa, and Mike (Patty) Nelson; brothers, Leonard and Gerald; sister, Isla Erickson; six grandchildren and three great-grandchildren. He was preceded in death by his parents, wife, and several siblings.

The family of Richard R. Nelson created this Life Tributes page to make it easy to share your memories.