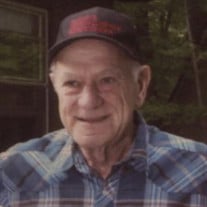 Richard “Rich” J. Boser, 78 year old resident of Pierz, MN passed away Sunday, October 4, 2020 at his home in Pierz, MN. A Mass of Christian burial will be held at 10:30 AM on Thursday, October 8, 2020, at St. Joseph’s Catholic Church in Pierz, MN, with Father Kenneth Popp officiating. Burial will take place in the parish cemetery. A visitation will be from 4 to 8 PM on Wednesday at the Shelley Funeral Chapel in Pierz and from 9 to 10 AM on Thursday also at the funeral chapel. Parish Prayers at 6 PM. KC prayers at 7 PM. Military Rites will be conducted by the Pierz American Legion Post #341. Richard “Rich” J. Boser was born on May 28,1942, to the late John and Margaret (Seelen) Boser. He was united in marriage to the late Genevieve Knopik on July 3,1970. Genevieve passed away in June of 1996. He then married Marjorie Stoll on September 29, 2000. Rich graduated from Father Pierz Memorial High School. He served in the Army during the Vietnam War from 1961-1963. Throughout his life he had various jobs including, working at Eller’s Shoe Harness Shop, owning one of the first garbage services in Pierz, working construction in the cities, and farming, the passion which he enjoyed the most since he bought his first calf at the age of 8 years old. He was co-owner of Rich Prairie Livestock Exchange for 39 years. Rich also enjoyed raising and watching the buffalo roam at his home on the farm. His pride was his grandchildren, which he treasured and loved spending time with. Rich enjoyed watching westerns, going deer hunting, shaking dice, playing cards, getting together with others each morning for coffee, and sharing a good laugh or story with his friends and family. He was a lifelong member of St. Joseph's Catholic Church, Pierz American Legion and the Knights of Columbus. Rich is survived by his wife Marjorie Boser of Pierz, MN; son, Bill Boser of Pierz, MN; daughter, Cindy (Russ) Marshik of Pierz, MN; step-daughter, Stacey (Erick) Haugland of Anoka, MN; brothers, Mickey (Lorraine) Boser of Osseo, MN; sisters, Evie (Ronald) Boser of Pierz, MN, Terry (Harvey) Block of Pierz, MN; grandchildren, Preston and Jordan Marshik of Pierz, MN; step-grandchildren, Briana, Brock and Brett Haugland of Anoka, MN. Rich was preceded in death by his parents, John and Margaret Boser; first wife Genevieve Boser; son, John Boser and brothers, Herb Boser, Floyd Adiens and Freddy Boser; sisters, Christine Duscher, Marie Collins, Dellie Brausen, LaVern Tanner, Doreen Jones, Catherine Wuellner, Lolly Hoheisel, and Tottie LeBalanc.

The family of Richard "Rich" J. Boser created this Life Tributes page to make it easy to share your memories.

Send flowers to the Boser family.