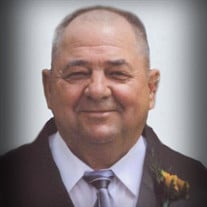 Richard L. Winscher, 75 year old resident of Little Falls, MN, passed away on Sunday, August 29, 2021 at St. Gabriel Hospital in Little Falls. A Gathering of family and friends will be held from 4 to 8 PM on Friday, September 3, 2021 at Shelley Funeral Chapel in Little Falls. Richard Lawrence Winscher was born on November 19, 1945 in Little Falls, MN to the late Reinhold and Loretta (Swedziak) Winscher. He was united in marriage to Sharon Roske on August 3, 1963. Rick worked hard his whole life and enjoyed talking about how tough it was growing up on the farm. Growing potatoes was his passion and he worked most of his life at Royal Farms in Royalton, MN, rising to the position of Farm Manager. Rick loved to build and fabricate farm equipment, often times making it better than new. The skid loader was his favorite machine to operate because it could be used for so many tasks. He loved to give his sons advice on successful farming too. Early mornings, before work, Rick could be found drinking coffee at the local café with his sons, family and co-workers. He loved spending time with his family and always held the babies, talking to them like they were the most important thing in the world. Easter rockets always made him laugh too. Rick had many hobbies such as hunting, spearing pike, riding his ATV, gardening, picking strawberries, and making the very best sausage ever! He raised horses, donkeys, goats, and one buffalo named Buffy. Richard is survived by his wife, Sharon; children, Ron (Beth) of Royalton, Scott (Dawn) of Royalton, Sheila (Steve) Schraut of Royalton, Becky Stoner of Little Falls, and Matt of Little Falls; brothers, Delroy of Royalton, Rodney (Arlene) of Royalton, and Michael (Kay) of Royalton; sisters, Muriel Jeanotte of Andover, MN, and Melanie Winscher of Garden Grove, CA; 7 grandchildren and 2 great-grandchildren. He was preceded in death by his parents, Reinie and Loretta Winscher.

Richard L. Winscher, 75 year old resident of Little Falls, MN, passed away on Sunday, August 29, 2021 at St. Gabriel Hospital in Little Falls. A Gathering of family and friends will be held from 4 to 8 PM on Friday, September 3, 2021 at Shelley... View Obituary & Service Information

The family of Richard L. Winscher created this Life Tributes page to make it easy to share your memories.

Send flowers to the Winscher family.