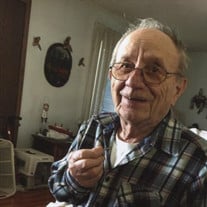 Richard C. Zehowski, 88 year old resident of Little Falls, MN passed away March 14, 2020. A Memorial Mass of Christian Burial will be held at 11:00 A.M. on Saturday, August 29, 2020 at Our Lady of Lourdes Catholic Church in Little Falls, MN with Father Ben Kociemba officiating. Burial will be in the St. Stanislaus Catholic Church Cemetery in Bowlus, MN. Visitation will be from 10 to 11 A.M. on Saturday at the church. Richard "Rich”/"Dick" was born July 19, 1931 in Bowlus, Minnesota to Leo and Ruth (Gosiak) Zehowski.  He was drafted by the US Army in 1953.  After completing basic training, he was deployed to Korea to fight in the Korean War as part of the 101st Airborne. Upon his honorable discharge with a rank of Sergeant he received the following service medals; Korean Service Medal, National Defense Service Medal, and the United Nations Service Medal.   He returned to his family home in Bowlus, MN - later moving to Little Falls, MN to start the next chapter of his life.    He married Rose Marie Anderson July 10, 1962 at St. Mary’s Catholic Church in Little Falls.  Richard was employed by AMF Crestliner where he worked for 30 years.  He was a lifelong member of the VFW and the American Legion.  Richard had many talents - he could fix and build anything!  He repaired boats at home and built custom cabinets and other furniture.  He was an inventor .... if he needed something to do a job and didn’t have it, he would make it.  He also had many hobbies that he enjoyed; working in his workshop, fishing, motorcycles, and gardening just to name a few.  Richard is survived by his two daughters, Anita Zehowski of New Hope, MN and Mary Zehowski of Saint Louis Park, MN.  He is also survived by his sister Loretta Dobis of Little Falls, MN; and brother Mark (Marie) Zehowski of Sobieski, MN. Richard had 5 grandchildren; Ashley (Charlie) Wozney, Wil Norman(Jamie), Corey Zehowski, Sarah Zehowski, and Clarissa Zehowski. Richard was preceded in death by his parents; wife Rose; sisters, Mary Zehowski and Irene Dobis; brothers, James and Albert Zehowski. “I am a tree, we got this”

The family of Richard Zehowski created this Life Tributes page to make it easy to share your memories.

Send flowers to the Zehowski family.