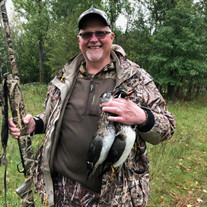 Ricky Turner, 62 year old resident of Randall, MN, passed away Thursday, January 7, 2021, at his residence surrounded by his family. A Mass of Christian Burial will be held at 11:00 A.M. on Tuesday, January 12, 2021 at Holy Family Catholic Church in Belle Prairie, MN with Father Ben Kociemba officiating. A visitation will be held from 9-11 A.M. on Tuesday at Holy Family Catholic Church in Belle Prairie, MN. Funeral arrangements for Ricky are with the Shelley Funeral Chapel. To view Rick's funeral service remotely please click the link and you will be redirected to the Livestream. https://www.facebook.com/littlefallscatholic https://www.youtube.com/channel/UCMfIg0_x49U0vQcIeRNUPVg Ricky Charles Turner was born on November 4th, 1958 to George and Arlene (Strack) Turner in Little Falls, MN. He grew up on the family farm in Randall, MN, and lived at home until he was joined in marriage with his wife, Carrie, on June 21st, 1997. Ricky and Carrie moved into Randall, where they spent their lives making memories and having fun. In 2009, Ricky started his own business, selling barbecue sauce. In the years to follow, he bought a concession trailer and started a catering business, which grew more successful as the years went on. It was a family business, and Carrie, Rudi, and Skylar were always there working with him. At the end of the day, when all the dishes were being done and everyone was tired from a hard day's work, Ricky would always say, "Home by 9:00!" Many times the day wouldn't quite be done by 9:00, but that didn't matter. On January 29th, 2019, Ricky was diagnosed with Stage 4 Pancreatic Cancer. He fought this aggressive disease with all that he had, and never once gave up the will to fight. His prognosis said he'd only live 3-6 months after diagnosis; he proved us wrong, and made it nearly 2 years. And those 2 years were wonderful. He lived so much life in those two years, and was proud to have done all the things he was able to do. He loved life, and most importantly, loved his family. Ricky passed peacefully on January 7th, at 9:00pm, surrounded by his family: wife, Carrie; daughter, Rudi; son-in-law, Skylar; and close friend, Aggie Mahoney, of Omaha, NE. This time, he really did make it "home by 9:00." Ricky was preceded in death by his father, George, and mother, Arlene. He is remembered and loved by many, and his legacy lives on through many family members and friends, but especially his wife, Carrie Turner of Randall, MN; daughter, Rudi (Skylar) Posusta-Chrast of Holdingford, MN; siblings, Jesse (Cynda) Turner of Randall, MN, Debbie (John) LeMieur of Little Falls, MN, Dennis (Lisa) Turner of Little Falls, MN and Carol (Glen) Salber of Little Falls, MN; many nieces, nephews, and friends. His favorite Bible verse was one shared and quoted very often, and even got a special place on his catering trailer: John 3:16 "For God so loved the world, that He gave His only son, so that those who believe in Him might not perish, but have eternal life." Ricky's final wishes were simple: he asked that we not be sad, but instead, happy, and have a beer on him.

Ricky Turner, 62 year old resident of Randall, MN, passed away Thursday, January 7, 2021, at his residence surrounded by his family. A Mass of Christian Burial will be held at 11:00 A.M. on Tuesday, January 12, 2021 at Holy Family Catholic Church... View Obituary & Service Information

The family of Ricky Turner created this Life Tributes page to make it easy to share your memories.

Send flowers to the Turner family.