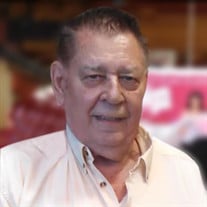 Robert "Bob" Feuling, 86 year old resident of Rice, MN and owner of Westside Liquor passed away Monday, February 21, 2022 at Chateau Waters CentraCare in Sartell, MN. A funeral will be held at 11:00 A.M. on Friday, February 25, 2022 at Trinity Lutheran Church in Sauk Rapids, MN with Rev. David Hinz officiating. Burial will take place in the St. Peter’s Lutheran Cemetery in Swanville, MN. Visitation will be held from 4-8 P.M. on Thursday and from 10-11 A.M. on Friday at Trinity Lutheran Church in Sauk Rapids, MN. Caring for Bob and his family is the Shelley Funeral Chapel in Little Falls, MN. Bob was born on December 1, 1935 in Winona, MN to the late Felix and Kathryn (Voelker) Feuling. He grew up in Plainview, MN on a farm where he attended school and graduated. After graduation, he began working for General Motors to save up enough money to go into farming. Life then took him into the Clarissa area where he earned a stellar reputation in farming and selling automated dairy equipment. In 1979, Bob purchased the Westside Bar in Little Falls, MN, where he met the love of his life Linda Johnson. They were united in marriage on September 15, 1979 at St. Peter’s Lutheran Church in Swanville, MN. Soon after they were blessed with three more children, Sarah, Rick, Lisa along with Bob’s four older children Ken, Deb, Rick and Julie. Bob began acquiring a few more bars, but later sold them to solely focus on the off-sale business. The passion Bob had for off-sale and the love he had for his customers and employees brought them to where they are today operating 8 stores throughout Central Minnesota. Bob’s love for his family was like no other. Anytime he gave a speech or visited with people, his family was always included in the conversation. Bob loved living on the river, going on the pontoon and spending time with family and friends playing cribbage and 500. He had an incredible, unwavering faith in the Lord, which he dedicated 40 years being a member of Trinity Lutheran Church in Sauk Rapids. Bob also did much philanthropy work in the area. He was involved in the MLBA (Minnesota License Beverage Association), Lions Club and contributed to local police stations, veteran’s organizations, as well as wildlife and hunting organizations. His theory was to support organizations that encourage families to spend time together. Bob will forever be remembered as a kind and gentle man with the biggest heart that loved his family, employees and community. He was dearly loved and will be greatly missed. Bob is survived by his loving wife, Linda Feuling of Rice, MN; children, Kenneth (Vicki) Feuling of Foley, MN, Deborah (John) Butorac of Princeton, MN, Julie Feuling of Alexandria, MN, Sarah (Jeremy) Hollenkamp of St. Cloud, MN, Richard (Shannon) Feuling of Rice, MN and Lisa (Matt) Hagstrom of Swanville, MN; sibling, Kay Carlson of Rice, MN; grandchildren, Laurie, Ryan, Alicia, Molly, Matt, Mackenzie, Garrett, William, Autumn, Deagan, Lucy, and Claire; 9 great-grandchildren; in-laws, Rollie Johnson of Upsala, MN, Harvey (Judy) Johnson of Swanville, MN, Joyce Johnson of Swanville, MN, Bruce (Lynn) Johnson of Swanville, MN, Kenny (Julie) Johnson of Breckenridge, MN and Barb Suhre of WI and godchild, Mary Carlson and his West Side Liquor Team. Bob was preceded in death by parents, Felix and Kathryn Feuling; son, Ricky Feuling; in-laws, Leonard & Donna Johnson; brother, Mike Feuling; brothers-in-law, Duane Johnson and Ralph Carlson; sister-in-law, Beverly Johnson and nephews, Paul and Jim. Memorials are preferred to the Feuling Family Birthing Center at St. Cloud Hospital or to Trinity Lutheran Church - Sauk Rapids, MN.

Send flowers to the Feuling family.