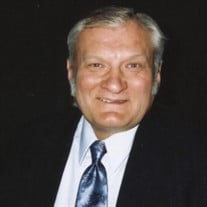 Robert "Bob" Ronyak, 79 year old resident of Minneapolis, MN, passed away on Saturday, October 16, 2021 at the Minneapolis VA Hospital. A Mass of Christian Burial will be held on Wednesday, October 20, 2021, at 12:10 P.M., at The Church of All Saints, 435 4th Street NE, Minneapolis, MN, with visitation starting at 11:00 A.M. at the church. An interment at St. Hedwig's Catholic Cemetery in Holdingford, MN will be held at 3:30 PM on Wednesday with the Holdingford American Legion Post #211 providing military honors. Caring for Robert and his family is the Shelley Funeral Chapel of Little Falls, MN. Robert “Bob” Ronyak was born on August 25, 1942 in Holdingford, MN to the late Benedict and Mary (Hritz) Ronyak. He attended school in Holdingford and then joined the armed forces and moved to the Twin Cities, where he worked for many years at Graco Inc. and ran a small engine repair shop.  Bob had one of the sharpest memories, never missing a birthday or anniversary.  He could walk anyone through any repair on the phone, just as if he were doing it himself. Bob loved to talk with friends and go out to Old Country Buffet. He enjoyed spending time with his family watching football and fixing anything he could get his hands on. Bob is survived by his brothers, Bernard and Raymond; sisters, Rosemary Pyka, Virginia Krawczynski, Mary Ann Lindsay, and Deborah Ronyak; 17 nieces and nephews, 23 great-nieces and nephews, and 5 great-great nieces and nephews. Bob was preceded in death by his parents, Benedict and Mary Ronyak; brother, Roman; sister, Rita and nephews, Eugene and Jude.

Robert "Bob" Ronyak, 79 year old resident of Minneapolis, MN, passed away on Saturday, October 16, 2021 at the Minneapolis VA Hospital. A Mass of Christian Burial will be held on Wednesday, October 20, 2021, at 12:10 P.M., at The Church of All... View Obituary & Service Information

The family of Robert "Bob" Ronyak created this Life Tributes page to make it easy to share your memories.

Send flowers to the Ronyak family.