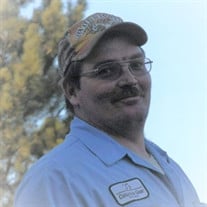 Rodney “Rod” O. Bollin, 50 year old resident of Grey Eagle, MN passed away Saturday, December 19, 2020 as a result of an accident at the shop. Funeral Services will be held at 11:00 A.M. on Wednesday, December 30, 2020, at Shelley Funeral Chapel in Little Falls, MN. Burial will take place at a later date. Visitation will be 4 to 7 PM on Wednesday, December 23, 2020 at the Shelley Funeral Chapel in Little Falls and one hour prior to the service on December 30, 2020. Rodney “Hot Rod” was born on February 9, 1970, in Browerville, Minnesota, to Alfred and Rose “Kjeldergaard” Bollin. Rod was married to Jennette “Joyce” Moore on August 5, 1994, in Little Falls, Minnesota. Rod and Joyce had five children: Harly, Cheyenne, Mercedes, Sierra, and Colton. Rodney loved his children very much. Rodney worked at New Flyer as an alignment technician during the children's early years. He then went to Central Specialties Inc. doing road construction as a broom operator until the children were in their teens. Rod and Joyce separated; his kindness was shown by the continuation of their friendship to the extent of weekly meals together. Upon the separation, Rod started working at Columbia Gear in Avon as a machinist. When Rod was not working, he enjoyed many hobbies, including riding horses, riding his motorcycles, fishing, and working on vehicles. He enjoyed cooking and grilling. Rodney said he was “made of steel” and many that knew him called him “Superman” or “Invincible” because of all that he had survived through, including but not limited to FIVE heart attacks, a chainsaw to his leg, and a severe motorcycle accident. Rod was one to do anything for anyone even if he was busy working on his own stuff. Rodney is survived by his father, Alfred Bollin; his son, Colton Bollin; his daughters, Harly O’Dea, Cheyenne Bollin, Mercedes Bollin, and Sierra Bollin; brothers, Dennis Bollin, Russell Bollin, Darwin Bollin, and Dale Bollin; sisters, Sheila Drayna, JoAnn John, Jackie Denelsbeck, Susan Pyburn, and Cindy Sandgren; and 8 grandchildren. Rodney was preceded in death by his mother, Rose Bollin; his brother, Phillip Bollin; grandparents, Elsie and Eliot Kjeldergaard, Otto and Luevern Bollin; his uncles, Gordon Bollin, Norman Bollin, Melvin Bollin, and Melvin Kjeldergaard; his aunts, Connie Nelson, Daryel “Dee” Karjala.

The family of Rodney "Rod" O. Bollin created this Life Tributes page to make it easy to share your memories.

Send flowers to the Bollin family.