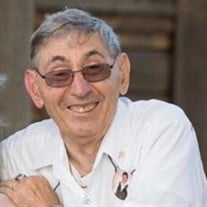 Roger Lee Walter, 78 year old resident of Little Falls, MN, passed away on Friday, June 18, 2021 at St. Cloud Hospital. A Funeral Service will be held at 11 AM on Wednesday, June 23, 2021 at Zion Lutheran Church in Little Falls, with Rev. Gary Hendrickson officiating. Burial will be at the Minnesota State Veterans Cemetery north of Little Falls. Visitation will be from 4 PM to 7 PM on Tuesday at Shelley Funeral Chapel in Little Falls, and from 10 AM to 11 AM Wednesday at the church. Roger Lee Walter was born in Scotland, South Dakota on December 31, 1942 to the late Oscar & Eleanor (Mueller) Walter. He moved to Minnesota early 1959, in the middle of 11th grade, and graduated from Askov High School in 1960. Roger entered into service with the U.S. Army in 1962, spending 3 years in the regular Army and 21 years in the National Guard, until he retired in 1994. He moved to Little Falls in 1960 with his parents and took a job at the Larson Oil Gas Station and FW Woolworth. Roger married Louise Canfield on February 8, 1964 at St. John's Lutheran Church in Grey Eagle, MN. He also worked a number of jobs in Little Falls such as, Larson’s Boats, Shell Oil Company, the Little Falls school district for 27 years, a wrecker driver for Rays Body Shop for 10 years, the Little Falls Police Reserves for 19 1/2 years, school bus driver for 34 years with Lemieur Bus Service, and Napa Auto Parts. Roger was a lifetime member of the Little Falls V.F.W. Post #1112. Roger worked hard all his life, but when he had free time, he enjoyed being outdoors, fishing and hunting and playing with his grandchildren. He was happiest when his family was gathered around him. Roger is survived by his wife, Louise; children, John (Kim), and James (Rebecca) Walter, both of Little Falls, and Judy (Danny) Freyholtz of Milaca, MN; grandchildren, Amanda, Max (Brittany), Evan, Caleb, Kyle, Sara (John), Dennis, Henry (Cory), Mathew, Pamela, Brandi, and Blaine; great-grandchildren Owen, Silas, Gabe, Jace, Dane, Abby, and Emma. Roger was preceded in death by his parents, Oscar & Eleanor Walter; stepfather,Emil Beck (1997), brother, Dwane (2003), son, Jason (2004) and grandson, Charlie (2014).

The family of Roger Lee Walter created this Life Tributes page to make it easy to share your memories.

Send flowers to the Walter family.