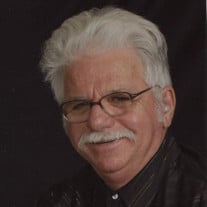 Ronald “Ron” J. Justin, 72 year old resident of Rice, MN passed away Sunday, April 24, 2022 at his home. A Memorial Mass of Christian Burial will be 11:00 AM on Friday, April 29, 2022, at St. Stephen Catholic Church in St. Stephen, MN with Father Ron Weyrens officiating. Burial will be in the Parish Cemetery at a later date. Visitation will be from 9:30 to 11 AM on Friday at the church. Caring for Ron and his family is the Shelley Funeral Chapel of Little Falls, MN. Ron was born on March 20, 1950 in St Cloud to the late Nicholas & Dorothy (Slivnik) Justin. He was united in marriage to LaVerne Pyka on February 24, 1979 at Our Lady of Mount Caramel church in Opole, MN. Ron attended Holdingford High School. After high school, Ron joined the army and proudly served from 1967 to 1969 in Washington DC in the honor guard. Ron drove truck all his life, first as an owner-operator and then retiring from Polar Tank after 32 years. Ron was a member of the Catholic War Vets and St. Stephen Legion Post 221. Ron enjoyed watching westerns, woodworking in his shop and ranger riding with his sidekick, Sadie. Survivors include his wife, LaVerne Justin of Rice; daughters, Jessica (Dan) Pappenfus of Holdingford, Jill (Zach) Schmitz of Rice; brothers, Kevin (Renee) Justin of St Stephen, Dale ( Renee) Justin of Brainerd; sister, Mary (Kevin) Rieland of Becker and many nieces and nephews. Ron is preceded in death by his parents, Nick & Dorothy Justin; brothers, Tom & Billy; infant sister, Sheila; mother and father-in-law, and sisters-in-law, Barb Gosiak & Della Wollack. Ron’s family would like to thank Dr. Linares & Maria at the St Cloud VA for the wonderful care throughout the years and also the St Cloud Hospital Heart Center and staff.

The family of Ronald "Ron" J. Justin created this Life Tributes page to make it easy to share your memories.

Send flowers to the Justin family.