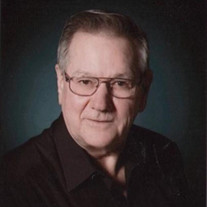 Ronald J. Tretter, 74 year old resident of rural Hillman, MN passed away Monday, September 21, 2020 at his home in Hillman, MN. A Mass of Christian Burial will be held at 11:00 A.M. on Monday, September 28, 2020, at St. John’s Catholic Church in Lastrup MN with Father Jose Chettoor and Father David Maciej officiating. Burial will be at the St. John’s Parish Cemetery in Lastrup. Visitation will be from 9 to 11 A.M. on Monday at the church. Ronald “Ron” Jerome Tretter was born on June 10, 1946 in Hillman to Herbert and Evelyn (Young) Tretter. He grew up in rural Hillman and attended country school. Ron worked at Excel Optical in Sauk Rapids. On July 4, 1964 he married Donna Girtz. Their first daughter, Teena was born in 1969 and Terry was born in 1971.  In 1973 they moved to St. Stephen, then in 1983 they moved to Ron's home farm.  He continued to work at Excel until he had in 20 years. Ron raised hogs  for many years. He drove redi mix truck for Pierz Redi Mix, Bauerly Brothers and Knife River for 20 years before he retired. Ron was very active as President of the Harding Lastrup Snodusters for 30 years. In his spare time, he enjoyed hunting and fishing with his grandsons and daughter. He also enjoyed snowmobiling and spending time with family and friends.  Ron is survived by his daughter, Terry (Steve) Athman of Hillman; grandsons, Kyler and Darren of Hillman; sister, Jeanette (John) Wuellner of Little Falls; brothers-in-law, Larry Hebler of Hillman, Kenneth Girtz of Hillman, Edward (Roseann) Girtz of Hillman. Ron was preceded in death by his wife, Donna; daughter, Teena; parents, Herbert and Evelyn Tretter; sister, Joann Hebler; mother and father-in-law, Edward and Inez Girtz; nephew, Ronald Girtz; and niece Joyce Girtz.

The family of Ronald "Ron" J. Tretter created this Life Tributes page to make it easy to share your memories.

Send flowers to the Tretter family.