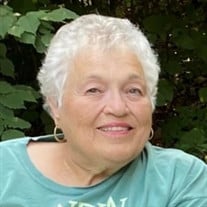 Not sure what to send?

Rosemary "Rozie" A. Anderson, 74 year old resident of Little Falls, MN, passed away on Saturday, January 8, 2022 at the St. Cloud Hospital. A Mass of Christian Burial will be held at 11:30 A.M. on Thursday, January 20, 2022 at St. Mary's Catholic Church in Little Falls, MN with Father Mark Botzet officiating. Burial will take place in the Chisholm Cemetery in Chisholm, MN, at a later date. A visitation will be held from 10-11:30 A.M. on Thursday at St. Mary's Catholic Church in Little Falls, MN. Caring for Rozie and her family is the Shelley Funeral Chapel, Little Falls, MN. Rosemary Ann Segar was born on January 11, 1947 in Hibbing, MN, to the late James and Emma (Pelizatto) Segar. Rosemary graduated from Chisholm High School in 1965. She was united in marriage to Wayne Anderson on June 25, 1966. They lived in Minneapolis, Cushing, and Browerville, MN, before settling in Little Falls. In her younger years, Rozie was active in 4H. Later on in life, she worked as a Home Health Aide for Todd and Morrison Counties, did daycare in her home, and sold Avon products for over 30 years. Rozie did various volunteer work and was an active member in the greater Minnesota Two Cylinder Club. She loved spending time with her family, friends and neighbors. Rozie loved camping, going on road trips with Wayne, and going to the lake. Gardening was her passion (especially her red geraniums). As her sister-in-law, Lois said, “No one was ever a stranger around her. Within 15 minutes or less, she knew all about who you were and you’d be friends. A very special lady, she was.” Rozie is survived by her husband, Richard “Wayne” Anderson; daughter, Lisa Kay Anderson of Fridley, MN; son, Eric Jon (Debra) Anderson of Becker, MN; brother, Albert (Roberta) Segar of Mankato, MN; sister, Teresa (Frank) Sikich of Hibbing, MN; sister-in-law, Lois Nelson of Williston, ND; 11 grandchildren, 6 great-grandchildren; many nieces and nephews. She was preceded in death by her parents, James and Emma Segar; father and mother-in-law, Ervin and Marie Anderson; and brother-in-law, Lloyd Nelson.

The family of Rosemary "Rozie" A. Anderson created this Life Tributes page to make it easy to share your memories.

Send flowers to the Anderson family.