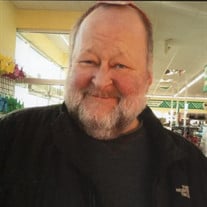 Russell “Russ" Howard Severson, 65 year old resident of Little Falls, MN passed away peacefully, Saturday, September 26, 2020 at his home in Little Falls, MN. A Gathering of family and friends will take place starting at 10 AM on Friday, October 2, 2020 at Shelley Funeral Chapel in Little Falls, MN. Interment will be at 12 noon at the Minnesota State Veterans Cemetery north of Little Falls. Russell was born on July 12, 1955 in Pipestone, MN to Howard and Dorcas (Bracken) Severson. He was united in marriage to Loralie (Kutzke) on September 8, 1984 with a private lake side service at Shamineau Acres Resort. Russell proudly served in the United States Air Force as a Tower Air Traffic Controller. He was very proud of all his hobbies and accomplishments throughout his life. He always had a story of some sort to tell. His hobbies included gardening, feeding and watching the birds on his many bird feeders, and his love for dancing. He had a passion for cooking which he passed on to his daughter and grandchildren. He spent countless hours at his smoker, smoking a variety of meat. Growing up, he was a well-decorated Boy Scout following in his father’s footsteps. He was very proud of the accomplishments he received throughout his time including, the extensive work done towards his Eagle Scout. Later in life, as his grandson Cole became old enough to join Boy Scouts, he was right there to help for over 10 years. He had a love for friends and family, but most of all, a love of his time well spent with his grandchildren, who were his pride and joy. Russell is survived by his wife, Loralie Severson of Little Falls; son, Ian and wife, Natalie and their children, Zoey and Tarissa of Valley City, ND; daughter, Jennifer Severson and significant other, Mike Peterson and their children, Cole, Beth, Abby, and Richard of Freedhem.; sister, Luann, her husband, Tom and their children, Josh and Alexis. Russell was preceded in death by his father, Howard; mother, Dorcas; and his uncle, Conrad.

The family of Russell Howard Severson created this Life Tributes page to make it easy to share your memories.

Send flowers to the Severson family.