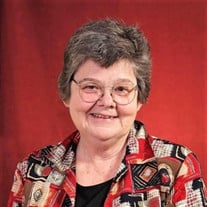 A celebration of life will be held Saturday, September 25, 2021, for Franciscan Sister Sharon Fitzpatrick, 76, who passed away March 6, 2021. Mass will take place at St. Francis Convent, Little Falls, at 11 am with a visitation from 9-11 am. Masks are required. Mass will be live-streamed on YouTube: https://www.youtube.com/channel/UCiyFvZ53PAfd1apBC88kEuQ Donations to Franciscan Sisters Ministries preferred. Sharon was born on September 25, 1944, in St. Cloud, Minn. She was the fourth of eight children born to the late Ed and Ellen (Smith) Fitzpatrick. Sister Sharon was very proud of her Irish heritage. She attended both elementary and high school in Foley, Minn., and in the fall of 1963 she entered the Franciscan Sisters of Little Falls, Minnesota. She was received into the novitiate on July 31, 1964, and was given the name Sister Mary Colleen. She returned to her baptismal name in 1976. Sister Sharon made her first profession of vows on June 13, 1966, and final vows on June 6, 1971. She was a Franciscan Sister for 56 years. Sister Sharon earned a Bachelor of Arts degree in psychology from St. Mary’s College, Winona, Minn. She was the co-founder and administrator of The House of Bread and Peace, a shelter for homeless women. Later, she was the co-founder and staff person at Becker House, a home for single women making transitions in their lives. Next, she was appointed Assistant Novice Director for the Midwest Franciscans Novitiate in Joliet, Ill. From 2009-2020, she was the Benefactor Relations Coordinator for the Franciscan Sisters. Sister Sharon ministered in Little Falls and Duluth, Minn.; Evansville, Ind.; and Chicago and Joliet, Ill. Sister Sharon was an all-around-person who was always concerned for the well-being of others. Her ministry to homeless women and those in transition tells how she did what Jesus would do in a given situation. She put her whole heart into whatever ministry she did. At the same time, she enjoyed life and brought joy to many with her Irish wit and humor. She was preceded in death by siblings, Colleen, Tim and Maureen. Survivors include siblings, Terry, Mike (Mary Jo), Catherine (Leroy) Herbst, and Tom (Sharon); sister-in-law, Georgette Fitzpatrick; nieces and nephews and her Franciscan Community.

A celebration of life will be held Saturday, September 25, 2021, for Franciscan Sister Sharon Fitzpatrick, 76, who passed away March 6, 2021. Mass will take place at St. Francis Convent, Little Falls, at 11 am with a visitation from 9-11 am.... View Obituary & Service Information

The family of Sr. Sharon Fitzpatrick created this Life Tributes page to make it easy to share your memories.

Send flowers to the Fitzpatrick family.