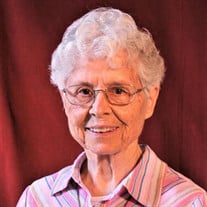 A celebration of life will be held Wednesday, September 15, 2021, for Franciscan Sister Mary Eileen Ghesquiere, 96, who passed away November 14, 2020. Mass will take place at St. Francis Convent, Little Falls, at 11 am with a visitation from 9-11 am. Masks are required. Mass will be livestreamed on YouTube: https://www.youtube.com/channel/UCiyFvZ53PAfd1apBC88kEuQ Donations to Franciscan Sisters Ministries preferred. Madeleine Ghesquiere was born on October 27, 1924 in Detroit, Mich. She was the second of four children born to the late Alois and Anna (Catteau) Ghesquiere, both of whom emigrated from Belgium. She attended Guardian Angel School all eight grades and graduated from Edwin Denby High School in 1942. She was very active in her parish and became a Third Order Franciscan. Madeleine entered as a postulant in January 1948. She was accepted as a Franciscan Sister of Little Falls, Minnesota, on August 12, 1948, and given the name Sister Mary Eileen. She made final vows on August 12, 1953. She was a Franciscan Sister for 72 years. Sister Eileen worked in medical records at St. Gabriel’s Hospital as a postulant and continued to work thereafter making profession. She became a registered medical record librarian administrator and was a medical records consultant and assisted medical records departments in smaller hospitals in the area. From 1969–1972 she was the secretary for the Franciscan Sisters. Later she served the community as Motherhouse Administrator and had a significant role in planning retreats as well as in developing the Motherhouse as a retreat center. Sister Eileen obtained a certificate in Formation and Spirituality from St. Louis University, St. Louis, Mo. Later she obtained a master’s degree in Theological Studies at Catholic Theological Union in Chicago. She was a core member of the Franciscan Sisters House of Prayer, was a retreat director, spiritual director, hospital chaplain and a pastoral associate, serving in Minnesota and in Albuquerque, N. Mex., and Tucson, Ariz. She had a probing mind and an energetic spirit that carried her through various ministries. She was enthusiastic about living her life. She had a way of helping people connect with one another on a faith level and grow spiritually. She found Saint Francis’s challenge to “rebuild my Church” stimulating. Sister Eileen was preceded in death by her brother, Maurice. Survivors include sisters: Sister Kateri Ghesquiere, CSJ; Irene Adams; nieces, nephews and her Franciscan Community.

A celebration of life will be held Wednesday, September 15, 2021, for Franciscan Sister Mary Eileen Ghesquiere, 96, who passed away November 14, 2020. Mass will take place at St. Francis Convent, Little Falls, at 11 am with a visitation from... View Obituary & Service Information

The family of Sister Eileen Ghesquiere created this Life Tributes page to make it easy to share your memories.

Send flowers to the Ghesquiere family.