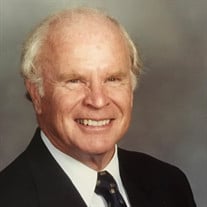 Stanley Jerome (Jerry) Johnson, a 91 year-old resident of Plymouth, Minnesota, formerly of Little Falls, Minnesota, passed away Saturday, December 12, 2020, at Methodist Hospital in St. Louis Park, Minnesota. A private family service will be held on Thursday, December 17 at Shelley Funeral Chapel in Little Falls. Burial will take place at Oakland Cemetery in Little Falls. A memorial service will be planned for some time later in 2021, after the pandemic lifts. Memorial gifts may be designated to Excelsior Covenant Church and Covenant Pines Ministries. To join the livestream for Jerry's funeral, click the link below for the 10:45AM service. https://my.gather.app/remember/stanley-jerome-johnson Jerry’s life was marked by a faithful, loving, and enduring Christian ministry that touched thousands of lives across the country and around the world with his gentle and giving heart. Following his graduation from Little Falls High School (where many of his classmates knew him as “Fudge”) he pursued undergraduate studies at North Park Junior College in Chicago before completing a history degree at the University of Minnesota, a seminary internship in Proctor, Vermont, and graduate divinity degree from North Park Theological Seminary in Chicago. Following seminary and ordination, he and his new bride moved to New London, Minnesota, and service with their first Covenant Church congregation. Future pastoral calls brought him and his growing family to Lake Worth, Florida; Milwaukee, Wisconsin; Denver, Colorado; and his final call and ministry, over fifteen years, to Excelsior Covenant Church, a congregation which honored him as Pastor Emeritus following his retirement from full-time ministry in 1994. In their retirement, Jerry and Tish continued to serve a number of churches in an interim capacity. During this time they also built a home together on the shores of Lake Francis near South Haven, enjoying lake life for over a decade before moving back to the metropolitan area. Over the years Jerry’s hours of rest and recreation were spent in his workshop, fishing boat, or camping trailer. Other times found him on frozen lakes, city walks, deep wood trails, or mountain adventures. His father’s longtime employment with the Northern Pacific Railway also provided a deep interest in prototype and model trains. Much of Jerry’s enjoyment in his hobbies sprang from early experiences at Larson Motors in Little Falls where he learned to repair and tune outboard motors, or in his time skating, skiing, fishing and deer hunting as a young man in Central Minnesota. He loved spending time outdoors, especially fishing or hunting. His gardens were lush and bountiful, bursting with tomatoes, rhubarb, and other delights. As to indoor activities, Jerry was an experienced woodworker and carver; he created any number of beautiful pieces that grace the homes of family and friends. Over the years he also built a number of model railroad layouts and enjoyed these with his children and grandchildren. Jerry also possessed a fairly wicked ping pong paddle. Many games were played on the family table. He loved music—as a performer, listener, and worshipper. Jerry and Tish were proud supporters of The Singers—Minnesota Choral Artists and attended many concerts together. He was an avid reader of Outdoor News; the Northern Pacific Railway Historical Society newsletter Mainstreeter; the Mission Friends publication, Pietisten; as well as novels, histories, theological works and biographies. Jerry lived a full, fruitful, and beautiful life—all shared with his family and many friends. We rejoice with him in his home-going, even as we grieve, knowing we will be together again. Well done, thou good and faithful servant. Jesus loves you, this we know. “Neither life nor death shall ever | From the Lord His children sever | Unto them His grace He showeth, | And their sorrows all He knoweth.” “Ingen nöd och ingen lycka, | Skall utur Hans hand dem rycka, | Han vår vän för andra vänner, | Sina barns bekymmer känner.” Jerry is survived by his wife, Tish; sons, Tim (Beth) Johnson and Randy (Judy) Johnson; daughters, Lenore (Brian) Frable and Lynette Johnson; grandsons, Jerod (Lindsay), Joel (Megan), and Caleb (Ariel); granddaughters, Annalise, Tori, Clarisa (Max) Finizio, Krista (Dylan) McNamara, and Jayden; and six great-grandchildren, Cali, Piper, Henry, Emma, Lewis, and Lars. Jerry was preceded in death by his parents; sisters, Dahlia and Elvira Johnson; and granddaughter, Brita Marie Johnson.

The family of Stanley "Jerry" Johnson created this Life Tributes page to make it easy to share your memories.

Send flowers to the Johnson family.