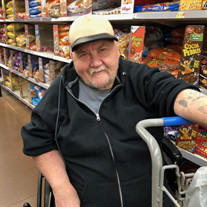 Stanley "Sonny" D. Rodeski, 67 year old resident of Little Falls, MN, passed away Sunday, February 20, 2022 at St. Otto's Care Center in Little Falls, MN. A memorial service will be held at a later date for Stanley. Caring for Stanley and his family is the Shelley Funeral Chapel of Little Falls, MN. Stanley was born on April 1, 1954, the firstborn son of Stanley and Rosemary (Yanta) Rodeski, also known as Sonny to friends and family. He attended his school years in the Little Falls Community school district prior to joining the United States Army when he was 18. After his service, he held a number of various positions including the Sanitary Bakery, Larson Boat Works and Burlington Northern Railroad. Sonny worked many years at Treasure City in Royalton. He then attended the community college in Staples, Minnesota to earn a degree in Graphic Design. Sonny really enjoyed painting, creating and bringing life back into signs around the community. Sonny also dabbled a bit with weird creations. If you knew Sonny you can recall this, and he always had a silly story or joke to tell, he got that from our mother who also loved people and to talk to whoever might want to listen. Sonny also liked to cook, go fishing, listen to albums and most recently, putting together puzzles. Sonny is survived by his three children, Shane Crystal, Jolene and Justin; 3 granddaughters; siblings, Jim, Vince, Mary, Renee and Gary. Sonny was preceded in death by his parents, Stan and Rose and brothers, Kevin and Kenny.

The family of Stanley "Sonny" D. Rodeski created this Life Tributes page to make it easy to share your memories.

Send flowers to the Rodeski family.