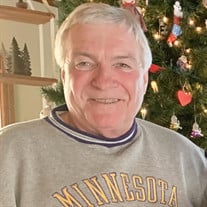 Steven E. Lundorff, 72 year old resident of Little Falls, MN passed away Saturday, July 10, 2021 at the St. Gabriel’s Hospital in Little Falls. A Celebration Of Life Service will be held at 12:00 PM on Monday, July 19, 2021, at the Camp Ripley Chapel inside the gates of Camp Ripley. Burial will be in the Minnesota State Veterans Cemetery. Visitation will be one hour prior to the service on Monday at the Chapel. Military Rites will be conducted by the Little Falls VFW Post #1112 and American Legion Post #46. Memorials or donations are preferred to the Little Falls VFW Post 1112. Caring for Steven and his family is the Shelley Funeral Chapel of Little Falls, MN. Steven E. Lundorff was born November 15, 1948 in Rush City, MN to the late Christian “Mike” and Irma (Virta) Lundorff. At the age of 16, his family moved from Sandstone, MN to St. Cloud, MN where he graduated from St. Cloud Tech High School. After high school, he spent his freshman year at St. Cloud State University where he lettered on the swim team. In the fall of 1967, he enlisted in the Army and served his country as a combat medic stationed in Vietnam. After returning from the war in 1970 he again attended St. Cloud State University where he would graduate with a B.S. in Medical Technology. During his college years he sparked friendships that would last a lifetime and met his wife. On August 31, 1974 he married Beverly “Bev” Johnson in Chisholm, MN. They briefly lived in Waukon, IA before moving to their home in Little Falls, MN in 1977. Steve worked at St. Gabriel’s Hospital and later various sales positions until joining the 256th Medical Detachment at Camp Ripley where he would work until 1998. He then worked at St. John’s University Fighting Saints Battalion - Army ROTC until his retirement in 2006. During retirement, he and Bev frequently traveled to Mexico, Florida, the family cabin on Sturgeon Lake and any location their friends were headed. He loved his annual smelting trip to the North Shore and the annual baseball road trip with friends where he would catch a Twin’s road series. In 2011, when he became a Grandpa for the first time, he discovered a newfound passion for spoiling grandkids. Throughout his life Steve was an avid outdoorsman spending time fishing, hunting, cross country skiing, picking agates, swimming, and most of all, gardening. He frequently shared his love for gardening by giving vegetables, flowers, and gardening tips to anyone willing to listen. Many summer days were spent on the Mississippi River north of Little Falls on his 28’ pontoon he had built in 1991 and very aptly named the “party barge”. He loved spending time on the river with friends and family swimming, fishing, listening to music, telling stories, and making memories. In the fall of 2014, he and his wife Bev fulfilled a lifelong dream to travel the Mississippi. They departed from Minneapolis, MN on their pontoon and made a 30-day journey to Mobile, AL visiting local harbors and sleeping under the stars along the way. Steve was very committed to the Little Falls VFW Post 1112. He served in various roles over the years. Steve will be remembered for his sense of adventure, loving life to the fullest and bringing smiles to people’s faces. He will forever be remembered in our hearts. Steve is survived by his loving wife, Bev Lundorff of Little Falls; son, Kevin (Brenda) Lundorff of Becker; brother, Richard Lundorff of Fridley, MN; sister, Kathy Tomporowski of St. Cloud, MN; grandchildren, Ava, Aaron, and Hannah Lundorff and many nieces, nephews, cousins, and friends. Steve was preceded in death by his parents, Christian “Mike” and Irma Lundorff; brother, Roger “Rock” Lundorff; sister-in-law, Sharon (Richard) Lundorff; father-in-law, Chester Johnson and brother-in-law, Ron Johnson.

The family of Steven E. Lundorff created this Life Tributes page to make it easy to share your memories.

Send flowers to the Lundorff family.