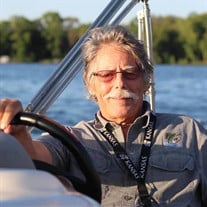 Terrance (Terry) L. Peterson, 77, passed away peacefully on February 1, 2021 at his family vacation home at Izatys Resort in Onamia, MN.He was born on July 14th, 1943, Eau Claire, Wisconsin, the son of James and Beverly (Curtiss) Peterson. He was raised in Eau Claire with his brother James. Terry graduated from Eau Claire High School, Class of 1961. Following graduation, he attended the University of Wisconsin-Eau Claire. After graduating in 1965, he married Karen Gunn. They moved to Stevens Point where he taught History and Social Studies at PJ Jacobs High School. In 1967, Terry and Karen moved to Madison, Wisconsin where he attended the University of Wisconsin and they had two children, Eric and Krista. Terry graduated from the U of W with his master's and Ph.D. in Psychology in 1970. He began his career in Psychology as a Professor for Gonzaga University in Spokane, Washington. There, he built a program to serve the Gonzaga schools’ need for school counselors. He then moved to Minnesota where he began his thirty-year career teaching at St. Cloud State University as the chairman of the Psychology Department. There he met Marilyn Jensen, whom he married on August 17, 1996 in an intimate ceremony at Izatys Resort with close friends and family. Terry was a Licensed Psychologist and had his own practice. He also worked as the Clinical Director at Catholic Charities for many years. After Terry retired, he was the Director of Evaluation of the STARS program through a Tri-County Federal Grant. Terry had several hobbies including hunting and fishing. He would spend much time hunting in the fall at his deer camp in Wisconsin. He spent many summer vacations in Canada with his wife Marilyn, son Eric, grandson Trenton, and their friends, Lora and Steve Muggli. Terry and Marilyn enjoyed spending summers at their townhome at Izatys Resort on Mille Lacs Lake with family and friends and their winters for the last six years in South Padre Island, Texas. They became close friends there with Jacquie Field and Brad Raynor. Terry developed amyloidosis and was treated by the Mayo Clinic medical staff in Rochester, MN. Although participating in these treatments and a clinical drug trial, his amyloidosis and subsequent heart failure continued to develop. Terry is survived by his loving wife, Marilyn Jensen of Avon, MN; son, Eric (Tammy) Peterson of Annandale, MN; daughter, Krista (Ralph) Olson of Parker, Co; grandchildren, Karissa and Trenton Peterson and Jaden Olson. Terry was preceded in death by his brother, James Peterson; and his parents, James and Beverly Peterson. Per his wishes, there will be a private family service at Terry’s cherished hunting grounds at his deer camp in Wisconsin. Arrangements are with the Shelley Funeral Chapel of Onamia.

The family of Terrance L. Peterson created this Life Tributes page to make it easy to share your memories.