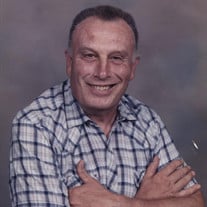 Thomas Houdek, 78 year old resident of Zimmerman, MN formerly of Little Falls, MN passed away passed peacefully in his sleep on Thursday, May 13, 2021. A Memorial Mass of Christian Burial will be held on Thursday, May 27, 2021, at 10:30 AM, at Our Lady of Lourdes Catholic Church in Little Falls, MN, with Father Ben Kociemba officiating. A visitation will be 9:30-10:30 AM on Thursday at the church. Burial will take place at the Minnesota State Veterans Cemetery north of Little Falls. Tom was born on September 24, 1942, in Mason City, IA, and was the first son born to Steven and Bertha (Schamber) Houdek.  When Tom was 12, his family moved to Little Falls, MN.  He graduated from Little Falls High School in 1960.  He had a short stint in the Marines after high school, then went right to work, spending a good portion of his time working in a paint factory.  In 1967, he met Susan “Sue” (Strobel) Houdek, whom he married in 1970. Tom had two children with Sue, Steven and Catherine (Cathy). In 1984, Tom and Sue divorced, but in time were able to build a good friendship. In 1979, Tom bought land in Otsego, MN, where he lived until 2019.  Tom was happy to carve out a place of his own, where his grandchildren, Aleksander & Josef (Steven & Katherine’s sons) and Ashley, Anna and Alyvia (Cathy’s daughters) could enjoy the extra space to run around and build a treehouse. Tom enjoyed fishing, dancing the two-step and watching pro-wrestling.  He will be remembered for his humor, his independence, and for being unapologetically, Tom.  Tom is survived by his son, Steven T. (Katherine) Houdek; grandsons, Aleksander and Josef; daughter, Catherine J. Houdek, granddaughters, Ashley, Anna and Alyvia. Tom was preceded in death by his parents, Bertha Houdek and Steven J. Houdek.

Thomas Houdek, 78 year old resident of Zimmerman, MN formerly of Little Falls, MN passed away passed peacefully in his sleep on Thursday, May 13, 2021. A Memorial Mass of Christian Burial will be held on Thursday, May 27, 2021, at 10:30 AM,... View Obituary & Service Information

The family of Thomas S. Houdek created this Life Tributes page to make it easy to share your memories.

Send flowers to the Houdek family.