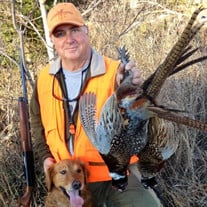 Tom P. Monahan, 66 year old resident of Little Falls, MN passed away Friday, September 17, 2021 at his home in Little Falls, MN. A Mass of Christian Burial will be held at 11:00 A.M. on Friday, September 24, 2021 at Holy Family Catholic Church in Belle Prairie, MN with Father Ben Kociemba officiating. A visitation will be held from 4-8 P.M. on Thursday and from 9:30-11:00 A.M. on Friday all at Holy Family Catholic Church in Belle Prairie, MN. Caring for Tom and his family is the Shelley Funeral Chapel in Little Falls, MN. The family of Tom kindly asks that all visitors to the funeral and visitation wear a mask or face covering and practice social distancing. To view funeral service via livestream please click link below and you will be redirected to Tom's livestream. https://my.gather.app/remember/tom-monahan Thomas Patrick Monahan was born in Little Falls, MN on April 9, 1955 to Harold and Clara “Bea” (Calhoun) Monahan. He was the 5th of 6 children. Tom spent his whole life in Little Falls and growing up on the Mississippi River. He graduated from Little Falls Community High School in May of 1974. Upon graduation, he began working full time for his parents down at the family store, Larson Motor Service. Throughout his teenage years and early 20s, Tom spent his winters racing Polaris snowmobiles, winning many races and acquiring many trophies. In the summer of 1978, while having lunch at the Pine Edge Inn he met his future bride, Peggy Lyter. On September 14, 1979 Tom and Peggy were united in marriage at Belle Prairie Church in Little Falls. In the years to follow they grew their family by welcoming 4 beautiful daughters into the world; Elizabeth, Kelly, Maria, and Anna. Although he was always the first to admit that raising 4 girls wasn’t easy, he wouldn’t have changed it for all the money in the world. He loved those girls with every ounce of his being. He was always so proud to tell everyone how he raised all 4 of them on a 22 ft Larson Hampton boat. Every summer weekend he and Peggy would pack up the boat and head up to Gull or Cross Lake where they spent their nights sleeping on the boat. Rain or shine, he’d drive around the lake with a smile on his face, and his family in tow. Boating was their life. He proudly taught the girls how to fish, how to ski, how to drive a boat, and most importantly, how to back a trailer into the water. As the years went on Tom continued to work at Larson Motor Service, and in 1991, he and his brother John took over the family business. Several years later, in 1999, Tom and Peggy purchased the business from John, becoming the sole owners. It has always been said that he was the “best dang boat salesman around.” He was the best in the business, earning many awards from both the Larson and Crestliner boat factories. He was friendly, knowledgeable, and most importantly trustworthy. Everyone knew Tom Monahan, and everyone loved him. Tom and Peggy expanded the business to several locations, and then in 2004 sold the Little Falls property and moved the business to Hwy 10, where it then became, and still remains, Monahan’s Marine. Tom took great pride in his business, and in knowing his customers, but nothing made him more proud than being a grandpa. In 2001 he earned the title of “Papa Tom” when he was blessed with his very first grandbaby. Throughout the years 9 more grandbabies were welcomed into the family, filling his heart so full, that he swore it was going to burst. Tom was a wonderful dad, and an even greater grandpa. He loved to share his passion for fishing, hunting, gardening, and cooking with his grandchildren. He loved to entertain, and he loved when the kids were over. In 2016 he and Peggy put in a swimming pool at their home on the river where he spent the last 6 summers swimming with the grandkids. He always wanted them to have a place where they could hang out and feel welcomed, but most importantly he wanted them to know how much he loved them. Aside from his family, Tom loved the outdoors. He loved to fish for walleye in the early summer, and always enjoyed the adventure of salmon fishing on Lake Michigan with friends. North Dakota duck hunts in October with his sons-in-law, and grandson, as well as a good Minnesota pheasant hunt with his golden retrievers. Tom never sat still, and he was always on the go. He also loved spending time in his yard, and tending to his many flower beds. He loved flowers, and loved to make his yard as beautiful as possible. Tom was an extremely grateful man, and always thanked God for his many blessings. Whenever asked how he was doing, he’d respond “livin’ the dream.” Tom is survived by wife, Peggy Monahan of Little Falls, MN; daughters, Elizabeth "Buffy" (Aaron) Meier of Little Falls, MN, Kelly (Jason) Westre of Sauk Rapids, MN, Maria (Jon) Archer of Little Falls, MN and Anna (Dave) Read of Brainerd, MN; siblings, Kathy Hawkinson of Florence, MT, Mary Staninger of Missoula, MT, John (Paula) Monahan of Little Falls, MN, Barb Liebel of St. Cloud, MN and Patricia (Perry) Adams of Houston, TX; grandchildren, Madeline Nuehring, Morgan Westre, Jonathan Archer II, Olivia Nuehring, Katelyn Westre, Thomas Archer, Emma Monahan, Noah Archer, Maxwell Meier, and Amelia Meier, brothers-in-law, Mike (Tracy) Lyter of NV and Rick (Sue) Lyter of WI and many nieces, nephews, cousins and friends. Tom was preceded in death by parents, Harold and Bea Monahan; nieces, Lindsey Rae Liebel and Dawn Michelle Hornaday; nephew, Lee Liebel; mother and father-in-law, Dick & Janet Lyter; and brothers-in-law, Kim Liebel, Don Hawkinson, Ken Staninger and Tommy Lyter.

The family of Thomas P. Monahan created this Life Tributes page to make it easy to share your memories.

Send flowers to the Monahan family.