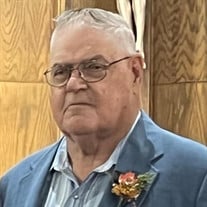 Thomas A. Nienaber, 77 year old resident of Burtrum, MN, passed away on Saturday, November 20, 2021 at United Hospital in St. Paul, MN. A Mass of Christian Burial will be held at 10:30 AM on Saturday, November 27, 2021 at St. John the Baptist Catholic Church in Swanville, MN, with Father Ron Dockendorf officiating. Burial will be in St. John’s parish cemetery in Swanville. Visitation will be from 4 to 8 PM Friday and from 9:30 to 10:30 AM Saturday at the church in Swanville, MN. Military Rites will be performed by the Swanville American Legion Post#313. Thomas Anthony Nienaber was born on February 16, 1944 in Albany Township, MN to the late Theodor and Marie (Borgerding) Nienaber. He enlisted in the United States Army in 1965 and was honorably discharged in 1967. Thomas was united in marriage to Rosemary Heinen on April 27, 1968 at St. Anthony Catholic Church in St. Anthony, MN. In 1973, Thomas and Rosemary moved to Burtrum where he continued his carpentry and then began farming. He was a faithful member of St. John the Baptist Catholic Church in Swanville. Thomas had many hobbies such as fishing, hunting, bird and deer watching, along with his ultimate passion of snowmobiling with his family and friends. He also enjoyed playing the concertina and singing Christmas carols with his family. Thomas loved his children, grandchildren and great-grandchildren more than anything. Thomas is survived by his wife of 53 years, Rosemary; children, Lisa Beek of Sartell, MN, Matthew Nienaber of St. Stephen, MN, Luke (Lynne) Nienaber of Holdingford, MN, Mark (Kaye) Nienaber of Swanville, Laura (Reuben) McGowan of Moorhead, MN, John (Rebecca) Nienaber of Clearwater, MN, and Stephen (Emma) Nienaber of Moorhead; brothers, Roman Nienaber of Sauk Centre, MN, Richard (Mildred) Nienaber of Melrose, MN, and Henry Nienaber of Sartell; sisters, Eileen Nienaber (Anthony) and MaryAnn Nienaber (Alfred), both of Saskatchewan, Canada; 15 grandchildren, and 6 great-grandchildren. He was preceded in death by his parents, Theodor and Marie Nienaber; brothers, Bernard, Harvey, and infant brother, Victor Nienaber; infant sister, AnnaMarie Nienaber; and sisters-in-law, Mildred and Lois Nienaber.

The family of Thomas A. Nienaber created this Life Tributes page to make it easy to share your memories.

Send flowers to the Nienaber family.