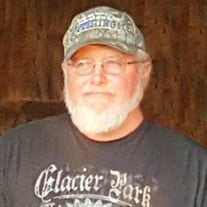 Todd J. Walker, 63 year old resident of Burtrum, MN, passed away Sunday, June 14, 2020, in Burtrum, MN. A celebration of life will be held for Todd on Friday, June 19, 2020, at the Burtrum Community Center in Burtrum, MN, from 3-8 P.M. Funeral arrangements are with the Shelley Funeral Chapel of Swanville, MN. Todd Jeffrey Walker was born July 25, 1956 in Hennepin County, Minnesota to the late Glady and Lionel Brown. His dad passed away when Todd was 2 and Glady then moved her children up to Grey Eagle area and married Dave Walker. Todd was united in marriage to Cindy Walker, they resided in Burtrum and raised two children. They later separated and Todd has been with his long term girlfriend of 15 years, Teri Fellegy. Todd went to basic training June 17, 1975 and stayed in for 6 years. He then started working for Tony Towel doing drywall and has done drywall ever since. He had his own business, “Walker’s Drywall” for many years. He worked for Donlar Construction up until he retired last fall. Dad loved doing any outdoor activity; from fishing, hunting, 4 wheelin, and mud running. Swap meets, auctions, car shows were his thing to do along with hanging out with family and friends. He was always out for a good time and making everyone else around him have a good time also. No matter how upset you were he always had a way of making you smile. He was always there for you, it might of been a day or two later but he always called or showed up when we needed him. We truly are going to miss his contagious happiness and smiles. He was one of a kind. Left to cherish his memory are his children, Shannon (Bill) Johnson, Jeff (Halley) Walker; grandchildren, RyAnn, Jerricka, Ellie and Hannah; his girlfriend, Teri Fellegy, his bonus children and grandchildren, Stacy, Eric, Kristi, Nicole, Dylan, Riley, Bennett, Grayson, Mallory, Jackson; dad, Dave Walker; brothers and sisters, Debbie (Alcuin) Wolbeck, Roxy Pfaff, Davie (Laurie) Walker, Johnny (Tanya) Walker; many nieces and nephews, and great-nieces and nephews. Todd was preceded in death by his mom and dad, and grandpa, Walt Walker. Memorials may be sent to Shannon Johnson: 3113 70th St. Swanville, MN, 56382

The family of Todd J. Walker created this Life Tributes page to make it easy to share your memories.