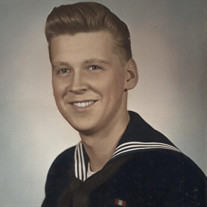 Tom J. Copa, 74 year old resident of Little Falls, MN, passed away Friday, January 29, 2021, at his residence. A Mass of Christian Burial will be held on Friday, February 5, 2021, at 11:30 A.M., at Our Lady of Lourdes Catholic Church, with Father Ben Kociemba officiating. A visitation will be held from 10:00-11:30 A.M., at the church prior to the funeral. Burial will take place following the funeral at the Minnesota State Veterans Cemetery. Tom Joseph Copa was born on September 9, 1946 to Harry and Rose (Rutz) Copa. He grew up on the west side of Little Falls and loved hunting squirrel, grouse, and deer with his father and brother, then later with his children on his Uncle Stanley’s farm. He also loved fishing of all kinds and watching John Wayne westerns. He graduated from Little Falls High School in 1964 and joined the United States Navy. He was a member of the Naval Secret Service stationed at the Pentagon for 3 years. After his discharge from the Navy, he met the love of his life Mary Jane (Lindberg) in March of 1968. They moved to Detroit, Michigan for one year and then moved to Minneapolis for five years. Tom and Mary were married on July 18, 1970 in Our Lady of Lourdes Church and then later moved back to Little Falls and purchased their home on the west side of Little Falls. Tom worked for Crestliner for five years then Anderson Processing, where he later retired after 37 years of exemplary service. In January of 1975, they had their first son Jeremy Joseph, and in June of 1979, they had their second son, Luke Michael. Upon their son’s graduation from Little Falls High School, like their father, both boys joined the Armed Forces. Jeremy joined the Marine Corps and Luke joined the Army. Tom couldn’t have been prouder of his boys for their service and following in his footsteps. Tom and Mary Jane celebrated 50 years of marriage in July of 2020. Tom battled an unknown illness for 14 years and lost the battle at his home on January 29, 2021. Tom was deeply loved and cherished by his wife, children and grandchildren and will be sincerely missed by all who have come to know and love this wonderful family man. Tom is survived by his wife, Mary Jane; his sons, Jeremy (Mary Beth) Copa, Luke (girlfriend Robyn) Copa; his grandchildren, Alexsis, Asiaann, Breeanna, Tiffany, and Royal; his great-grandchildren, Hunter, Everett and Jasper; his brother, Michael (Cathy) Copa, and sister Karen (Jerry) Ringwelski. Tom was preceded in death by his parents, Harry and Rose Copa and his in-laws Olaf and Molly (Scribner) Lindberg.

The family of Tom J. Copa created this Life Tributes page to make it easy to share your memories.

Send flowers to the Copa family.