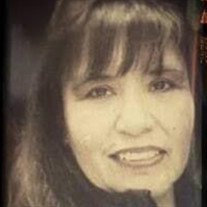 Baabiiyobiikwe, Ursula was raised by Shirley and William Boyd, when she was 14 years old, she moved back to South Dakota with her mother and later attended Flandreau Indian School. She returned to Minnesota in 1991 and worked at Grand Casino... View Obituary & Service Information

The family of Ursula Dawn Weyaus created this Life Tributes page to make it easy to share your memories.

Baabiiyobiikwe, Ursula was raised by Shirley and William Boyd,...