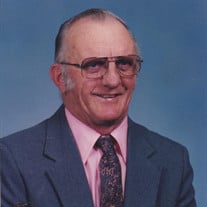 Vernon O. Pearson, 93 year old resident of Little Falls, MN, passed away on Thursday, June 24, 2021 at Edgemont Place Assisted Living in Blaine, MN. A Funeral Service will be held at 11 AM on Tuesday, July 6, 2021 at First Lutheran Church in Little Falls, with Rev. Beth Pottratz officiating. Burial will be at Oakland Cemetery in Little Falls. Visitation will be from 10 to 11 AM Tuesday at the church. Vern was born on the family farm in Todd County, MN on December 10, 1927 and married Dorothy Francis Slimmer on September 14, 1946. Vern worked at various places throughout his life but the time spent at National Bushing in Little Falls was his most memorable. He retired after 32 years of service in 1989. Vern and Dorothy loved to camp, fish, hunt, and snowmobile with friends and family. He loved to water ski and was still up on skis when he was 75. Family was always most important to him and after retirement, he said “even if you are an old guy like me, you just have to do some of the fun stuff with the grandkids,” which Vern always did with enthusiasm. He was always the first one to pick up a bucket to start a water fight and never gave up, paybacks came when you were least expecting them. Vern is survived by his son, Marsh (Trice) Pearson of Grasston, MN; grandchildren, Jennifer (Pearson) Carisch of Otsego, MN, Heather (Brandon) Gammon of Blaine, MN, Bryant (Robin) Doege of Little Falls, MN, Tony (Kathy) Pearson of Lincoln, CA, Mike (Tami) Pearson of Moraga, CA; brothers, Lyle Pearson (Marie) of Brainerd, MN, Donnie Pearson (Alice) of Long Prairie, MN, Dave Pearson (Joanie) of Pillager, MN; sister-in-law, Joanne Pearson of Little Falls, MN; 16 great-grandchildren and 3 great-great-grandchildren. Vern was preceded in death by his parents, Oscar and Ida Pearson; wife, Dorothy Pearson; son, Larry Pearson; granddaughter, Kelly Swiggum; brothers, Paul, Lloyd and Bud Pearson.

Vernon O. Pearson, 93 year old resident of Little Falls, MN, passed away on Thursday, June 24, 2021 at Edgemont Place Assisted Living in Blaine, MN. A Funeral Service will be held at 11 AM on Tuesday, July 6, 2021 at First Lutheran Church in... View Obituary & Service Information

The family of Vernon O. Pearson created this Life Tributes page to make it easy to share your memories.

Send flowers to the Pearson family.