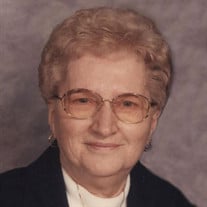 Vivian M. Husnik, 92 year old resident of Pierz, MN formerly of Lino Lakes, MN passed away Thursday, February 4, 2021 at the Pierz Villa. Mass of Christian Burial will be at 10:30 AM on Wednesday, February 10, 2021, at St. Joseph’s of the Lakes Catholic Church in Lino Lakes, MN, with Father Doug Ebert officiating. Burial will take place in Parish Cemetery. Visitation will be from 9:00 to 10:00 AM on Wednesday at the Mueller-Bies Funeral Home in Lino Lakes MN. Vivian M. Husnik was born June 15, 1928 to George M. Rochat & Lena (Charest) Rochat. Vivian had 3 sisters, Laverne, Shirley and Carole, and grew up in New Brighton, MN. She met her future husband, Leonard J. Husnik (her beloved Lenny) on a blind date set up by friends, Bernice & Tony Shutta and were married on August 30, 1947. They were married for 54 years and resided in Lino Lakes, where they raised their 2 daughters, Kathy & Kim. Mom was a great cook & baker, spoiling Lenny with her famous apple pies & cakes each Saturday. Later in life, she was dad's caretaker as his health failed. We never would have had dad with us as long as we did if it weren't for Mom's loving care. Mom enjoyed her Monday shopping sprees with Kathy & rooting Kim on at her softball games & being her biggest fan. Vivian enjoyed being Grandma to grandsons, Jeremy & Joshua & granddaughter Kayla, who called her Gammy. Vivian is survived by her daughters, Kathy (Jeff) Krause & Kim (Paul) Nalipinski. Grandchildren, Jeremy (Carla) Krause, Joshua Krause, Kayla Nalipinski and 2 great-grandchildren. Vivian was preceded in death by loving husband, Leonard, of 54 years. Now Mom & Dad are reunited in Heaven once again. Mom will be missed dearly. We love you "Whole Bunchies".

The family of Vivian M. Husnik created this Life Tributes page to make it easy to share your memories.

Send flowers to the Husnik family.