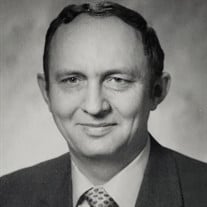 Wayne Leo Thompson, 92 year old resident of St. Paul, MN passed away on Ash Wednesday, March 2, 2022 at the VA Medical Center in Minneapolis, MN. A funeral service will be held at 11:00 A.M. on Saturday, March 12, 2022 at Immanuel Lutheran Church in St. Paul, MN (104 South Snelling Ave., St Paul, MN). Visitation will be held from 10:00-11:00 A.M. on Saturday, March 12, 2022 at Immanuel Lutheran Church in St. Paul, MN. Luncheon to follow at TBD location. The service will also be live-streamed from YouTube Channel ilcsp. Interment will be in the spring at Camp Ripley (Minnesota Veterans Cemetery - Little Falls) and an announcement will be published. In Lieu of Flowers, memorials can be made to Northern Star Scouting, Wayne Thompson Memorial, 6202 Bloomington Rd, St Paul, MN 5511, or Immanuel Lutheran Church, Wayne Thompson Memorial, 104 S Snelling Ave, St Paul, MN 55105 or to a charity of your choice. Wayne was a very thoughtful and loving husband, father, grandfather, and friend; he was well loved and will be missed. Wayne is survived by Lola May Thompson, his beloved wife of 64 years; his children, Mark (Kim) Thompson and Scott Thompson; and his Grandchildren, Chris, Lydia, Abby, and Lauryn. Wayne was born in Little Falls, MN in 1929 to Leo and Clara Thompson, and outlived two older sisters: Carol and Leora, and a younger brother Keith. He helped with his father’s funeral business and graduated from the University of Minnesota in Civil Engineering. After college, he enlisted in the Army. He became a 2nd Lieutenant during the Korean Conflict. After the army, in 1955, he worked at an Engineering consulting firm in St Paul and helped with the Minneapolis-Saint Paul International Airport runway update project. Later he worked for 35 years at 3M as the Structural Engineer Manager whose group was responsible for worldwide 3M construction design. He met Lola May in Little Falls and in 1957 they married and made their home in St Paul where they raised their family. He was a very involved member of Central Lutheran Church and volunteered there in many ways over the years. He was also very involved with helping the BSA Scout Troop where Mark and Scott both received their Eagle ranks. As a youth, Wayne was also a scout and completed the rank of Life. When the grandchildren arrived he enjoyed attending little league and softball games, and learning about all their adventures. Taking special trips with his whole family was especially treasured by Grandpa Wayne. He enjoyed time at their lake cabin: Years ago teaching Mark and Scott to fish, driving the water-ski boat, going inner-tubing with the grandchildren, boat rides, and playing cribbage with his lake buddy. He also enjoyed entertaining friends for the weekend and the large family reunions. Caring for Wayne and his family is the Shelley Funeral Chapel of Little Falls, MN.

The family of Wayne Leo Thompson created this Life Tributes page to make it easy to share your memories.

Send flowers to the Thompson family.