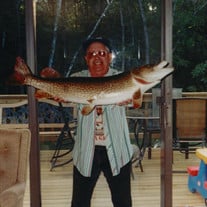 Murphy (Wilmer J. Vivant Jr.) age 88 of Onamia, MN passed away peacefully at his home with loved ones at his side. A Memorial Service will be held from 11-2 Pm on Saturday, July 11, 2020 at the Onamia Park. Arrangements are with the Shelley Funeral Chapel of Onamia. Murphy was born on March 1, 1932 in Saint Paul, Minnesota to Wilmer and Ruth Vivant. He graduated from Isle High School in 1950, worked as a surveyor, then joined the Navy in 1951 thru 1953 during the Korean War. He moved to South Dakota and worked for a farmer where he met and married the love of his life and soul mate Mary Schoen in August of 1955, love lasting 59 years till her death in 2014. To this wonderful union, 5 children were born. Murphy’s grandfather was Sam Vivant, who owned Vivant’s Boatworks that started Murphy’s passion for working with wood. Hugo Gross bought the business, and Murphy continued to work there. Later he worked for Wilkerts and Woodcraft in Foreston, Minnesota where he retired. He drove launch for Eddy’s Resort and owned and operated a small hobby farm that was his fathers. Murphy bartended at the Vet’s Club, was a member of the Camp Johnson School Board, Commander of the Onamia VFW, board member of both the Legion and VFW of the Vet’s Club, and was on the Honor Guard for many years. He loved deer hunting, fishing, and sitting outside enjoying the wildlife. His humor, wit, and wonderful smile touched the heart of many. Murphy was very proud to be a veteran! He was a very dedicated husband to Mary. He treasured the time he spent with his children, grandchildren, great-grandchildren, and many friends. He will be sadly missed by his family and all the lives that he has touched. Murphy is survived by his children, Dana (Leigh) Vivant, Charene Faust, Laurie (Steve Nelson) Vivant; 3 grandchildren, Beau (Jesse) Vivant, Ryan (Katie) Vivant, Kathy (Jay) Hazeman; and 13 great-grandchildren. He was preceded in death by his wife, Mary; parents, Wilmer Sr. and Ruth Vivant; son, Bruce; daughter, Billie Jo; grandson, Brian Korte; and son-in-law, Buford Faust.

Murphy (Wilmer J. Vivant Jr.) age 88 of Onamia, MN passed away peacefully at his home with loved ones at his side. A Memorial Service will be held from 11-2 Pm on Saturday, July 11, 2020 at the Onamia Park. Arrangements are with the Shelley... View Obituary & Service Information

The family of Wilmer James Vivant Jr. created this Life Tributes page to make it easy to share your memories.